The American Woman Today-- What do You Think? 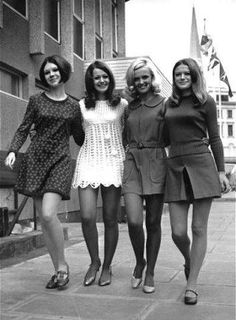 We recently inherited a 1960 set of Encyclopedias from my in-laws. It has been fascinating to skim through these books and get a snap shot of what the world was like during that time and what people were thinking about.  Many things haven't changed (like an elephant is still an elephant, right?) but there were other entries that were obviously dated. For example, there were several pages under "fallout shelter" about how to create your own shelter in your home with detailed instructions about what to do in case of a nuclear attack! It was also very interesting to read though the entry on "family" in this Encyclopedia. Here is the first paragraph,

"Family is the oldest human institution. In many ways it is the most important. It is society's most basic unit. Entire civilizations have survived or disappeared depending on whether family life was strong or weak. Families have existed since earliest times and will undoubtedly exist as long as man lives on earth.

Families make up the basis of every society because they serve three vital human needs found everywhere. First, the family is the means for producing children and continuing the human race. Second, the family provides for protection and early training of infants. Human infants are perhaps the most helpless of all living creatures... Third, the family sets up a division of labor so that each member contributes something....

...Marriage is the beginning of family life. When a man and a woman marry, they make a legal contract to live together as husband and wife. They also accept the legal responsibility to support and care for any children they may have.

... Most people belong to two families during their lives, the first as children and the second as parents. We are born in to the first family and we establish the second one."


It seems almost incredible in our day in age to think that this was published as the DEFINITION of what a family is. I feel like this definition says so plainly and concisely the truth (and what I was trying to explain in my Cultivating a Heart Open to Life series). It a little sad that today many people are choosing to live in ways that are in incompatible with the perpetuation of human life and, as the definition, stated that is often what makes or breaks an entire society.

Another interesting aspect of these Encyclopedias is that they came with three "year books", one for 1968, 1969, and 1970. There was one article in the 1969 Year Book that interested me particularly. It was entitled The American Woman Today written by the famous anthropologist Margaret Mead. It is a fascinating glimpse into what was perceived as the problems, challenges, and opportunities facing American women in the 1960's. There were a few parts that I thought were really interesting. For example she wrote about why, even though American women are often "the envy of women throughout the world", they are not the happiest women in the world.  She wrote:

"The American woman herself, however, presents a curious echo of what the world thinks of her. "I ought to be perfectly happy. I have a devoted husband, a lovely home, many friends, three delightful children, and yet..." The sentence usually ends in self-criticism of one sort or another. "Why am I not happy? What is wrong with me? I know there ought to be something I could do about it,"

During other periods in history, when society was more socially stratified, a woman did not have to measure herself in every respect against all other women. The peasant girl did not judge herself by the way the princess lived, no matter how much she might daydream... Only very occasionally, and only for the imaginative, did a woman spend her life in wishing she had everything she had ever heard about or dreamed of.

But in contrast to the times gone by, the United States today is an open society. In addition to the cherished belief that any boy can be President-- and in the dreadful fact, any kind of boy may be-- runs the myth that every girl can be a complete success as a woman, a marvel of beauty and skill and efficiency.

... Against such measures of status, no woman- no matter how fortunate or beautiful or loved, no matter how well-read or trusted by her children, or adored by her husband-- can ever vote herself a complete success or completely happy. She may have a life she would not exchange for any other, but there is still so much she could be, do and have. She turns the sense of all she has back upon herself and in her search for success demands more of herself is she is self-conscious and aware; for herself if she is less sophisticated."

If comparing ourselves to ideal portrayed in media was a problem in 1960 I think women in 2016 have it even worse! Social media exacerbates this tendency because we see people post "real life" pictures and we invariably compare it out our real life-- which is normally not as pretty, put together or exciting. Yet the images we see on the Internet do not capture the complexity of the person's life-- all their struggles, strengths, problems and triumphs. You don't know that it took her an hour (and several tantrums) to get that cute picture of her toddler, that her marriage is suffering, that she is struggling with depression, that she doesn't feel as good about herself as she pretends, that the reason she has nice things is because she is in debt, or that behind the backdrop she has a messy kitchen. We expect so much of ourselves based on unrealistic expectations,  many of which we create ourselves!

In her article Mead also mentioned that some of the biggest changes that came for American women happened during the Industrial Revolution, when families no longer worked together and women's work became more isolated. This isolation just increased when the servants or other female relatives who use to share the household work we replaced by machines. This change not only shifted women's role in the home from one as producer (making the clothing and food her family needed) to become almost totally a consumer-- no longer contributing materially to her family's needs. Also, with these machines came the expectation that they would now "free" women of household work that (because it is service based) was seen as degrading. It became expected that a woman should support herself financially and "contribute" to society through working outside of the home, because the home was increasingly seen as oppressive. Yet, another consequence of this was that women were no longer dependent on each other. They did not need each other like they did when they  shared the burden of production, and thus women (though more engaged in public life) felt increasingly isolated and alone.  Mead wrote,

"Probably no other aspect of the lives of American women is so isolating as the lack of ability to cooperate closely, within the same four walls, with other women."

Another consequences of this trend towards industrialization and personal independence was that  women who at the turn of the  century were involved in large numbers in community and service organizations (like the temperance, unions, poverty reduction, etc...) no longer had time for such "unpaid" endeavors. Mead wrote,

"The women who formed the backbone of the women's organizations in the first quarter of the century, when the style was set, still had servants and were thus free to give their time and thought to volunteer work. Their granddaughters, on the other hand, are doing their own housework and with more and more frequency are employed outside the home, or continuing their education in hope of later employment."


While reading this I realized that if the Mormon women in Nauvoo were in a position to petition Joseph Smith to start a "Relief Society", one in which they could use their time and resources to help the needy, shows that they had reached a certain level of wealth and prosperity. These women, because they had servants and enough help themselves, were not burdened with the task of providing for themselves or overwhelmed with the responsibilities of housekeeping and children. It made me wonder if perhaps the reason that sometimes our Relief Societies struggle today is because modern women are burdened down with housework, children and the additional expectation of providing for themselves and their families.

Honestly, there are many times I have dreamed how wonderful it would be to have another woman, like the age-old unmarried aunt or sister, living with me to help with the huge task of running a family and a household. A dishwasher and a washing machine are nice but they can't babysit the kids while you go to a city meeting, take something to your sick neighbor, talk to you when you are feeling lonely, or give you a realistic expectation of what constitutes success. I think women need women in a really important way. It makes me wonder how we can get back some of the sisterhood that our foremothers had? Are we doing a good enough job for each other? Or do we need to find more ways to breach the isolation of our independent modern lives?

The last point that Mead makes is that the birth control pill also brought (and was bringing) huge changes for American women. Not only because it was beginning to dramatically reduce the size of families, but because of the  expectation that it brought with it. The birth control pill claims to have "liberated" women from the life-producing aspect of their bodies. With that liberation came the expectation that women could at last be just like men and take responsibility for themselves. If they got pregnant it was their "fault" and they were expected to take total responsibility for it. As Mead wrote,

"The last vestiges of any sort of protectiveness toward women are being swept aside, even as four-letter words infiltrate the most respectable publications, girls wear pants as well as skirts, and men no longer give up a seat, even to a pregnant woman."


In some respects this lack of protectiveness has been good, because it has opened up opportunities for women in which they excel. Yet, the problem is that the expectation that women should be free from the confines of their biology still persists, but it is not any more true now then it has ever been. It is impossible to completely separate women from their life giving potential and from their responsibility to care and rear children. It is an innate part of our biology and our genetic and spiritual make up. I think that many of the conflicts that women face (like increasing rates of single mothers and the prevalence of abortion) is evidence of this struggle between the expectation of liberation and the reality of being unable to change a woman's fundamental biological nature... though people still try.

I feel like I could ramble on forever about this type of stuff, but I don't have time to do that (because of my biological responsibility to my offspring who are hungry for lunch). But I would love to hear your thoughts.

What do you think about the points Margaret Mead brought up?  Agree? Disagree?

Does what she  say still apply to the American Woman today?