Vashti: Put Your Crown on and Stand Your Ground {Idea for YW Mutual Night} 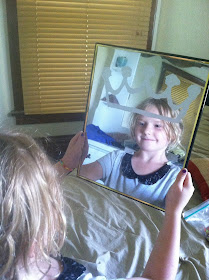 I was recently (okay, recently as in four months ago) called to be the Young Women's president in our Ward. I haven't ever had a calling in young women's (not since I was a young woman) and so it has been a big learning experience for me. I've also never been a president of anything. I'm discovering that being the president is much different from being a counselor. Kudos to all of you who make it look easy!

Overall though, I have been  having lots of fun. I love having a captive audience to share all my love and excitement about womanhood and the women in the scripture with. I'm not sure if they appreciate it,  but so far I have absolutely loved teaching and learning with them. I'll also be honest and admit it is nice to "have" to go do something without my kids on Wednesday nights-- or you know-- take a whole day and go boating. It has been a nice break and something I've really needed. I really have an incredible group of girls which makes it even more fun.

Ever since I was called I've been feeling a reminder from the Lord that I need to share with the girls my love for the women in the scriptures. I've tried to incorporate them into some of my Sunday lessons but the spirit keeps telling me, "More, share more." My counselor and I decided that on the fifth Wednesday of each month (which only happens a few times a year) we are going to dedicate to "women in the scripture" nights and focus on one woman from the scriptures. Since the girls are in a teaching environment all day at school and, then (at least in our ward) have seminary right before mutual, we decided we are going to share the story by doing an activity or craft that reinforces the message that scriptural woman embodied.

Our first fifth Wednesday was last night and our first woman from the scriptures was Vashti. Vashti was the queen of Persia, which meant she was pretty much queen of the known world. In her time period no one, not even men, disobeyed an order from the King and women were expected to obey their husbands without question. So when the Persian king, who was on day 7 of his frat party, wanted to show off the beauty of his wife to all his drunken friends, he expected that she would come.

In a very brave and very self-respecting way Vashti refused to come. She knew that what the King was asking of her was wrong and that it degraded her as a queen and as a woman. She held her ground and refused to go, even knowing that her choice would mean death or banishment. Still she had the courage to say "no" and not allow someone to cross boundaries they were not entitled to. Her answer made the king and all the rest of the men angry, and it resulted in harsh consequences for her and the rest of the women of the kingdom, but it was an incredibly brave choice.  I love what Vanessa Ochs wrote in my new favorite book about women in the Bible. She said:

“The women saw Vashti taking care of herself by saying “no”. They knew she was taking care of them too, by modeling what they often imagined doing themselves, but too rarely did. She showed that they boundaries of a woman’s dignity may not be violated. She demonstrated that any woman, not just a queen, could say, “Not now, not unless its on my terms as well, not unless I’m fully comfortable, not unless I am treated with dignity.” Only a woman who is respected can be expected to show respect.

“ I will not go.” Her words stayed in the women’s heads in the days after they had left the banquet, as they brushed their daughter’s hair. They could say it too, and they could teach it to their daughters. They practiced the words in their heads: “I will not go...

...To act in the spirit of Vashti, you will need a crown to remind you and announce to others that you have the right to do what is necessary to preserve your dignity. True, you might not actually go out wearing your crown… But you do need to own a crown, and place it somewhere you and others can see it easily, to remind you of your right to define your own boundaries.”

I told the girls the story of Vashti and talked about how it is okay to say "no" and to set personal boundaries for yourself. Like Vashti there are times when every woman will need to, royally and regally, put on her crown, stand her ground, and refuse to be treated in a way that degrades or belittles who she is. Every woman needs a crown. This part didn't take more than ten minutes and then we went to the gym and made mirrors with crowns etched on them to remind them of Vashti's story. 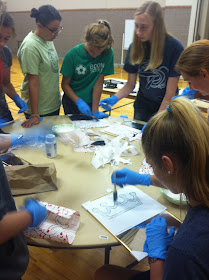 The mirrors were just ones from the dollar store and we traced this crown template onto contact paper. The girls then used etching cream to put the image of the crown on their mirror. If you have never used etching cream before, it is really easy. The result was a mirror that when you look into you see yourself with a crown on your head-- a reminder of who you really are and what you are capable of.

It took about a half hour to do the mirrors. The mirrors needed to sit with the cream on them for about 20 minutes, so in the meantime we had a dress competition. We broke them into two teams and gave them each several rolls of toilet paper and the dregs of my wrapping paper box. Their instructions were they had 15 minutes to create a dress Vashti would have worn (including a crown) out of only those materials. The end result was pretty impressive I think! 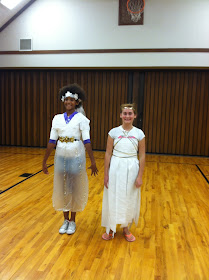 We had intended to play a short game of charades where they girls would mime different scenarios where they could be a Vashti and say "no". It ended up that we didn't have time to do it, but some scenarios were thinking about giving them to act out were:


There are lots more, but those were just a few of the ones we had thought of. It is also important with this type of lesson though that you are sensitive to those girls who are or have been in abusive situations. Be prayerful and thoughtful about how you'd address this topic with your specific girls.

After the dress game we washed the cream off the mirrors. They turned out great and I think the girls really enjoyed learning how to etch things. Before they left I wanted them to all look in their mirrors and see themselves with a crown on their head, a reminder of who they really were. I also wrote this phrase on the chalkboard and had those who wanted to (which was most of them) to write it on the back of their mirror.

I am the daughter of a king.
I am wonderfully and beautifully made.
I am powerful because I am kind and courageous.
I can do hard things.

I don't know who to give credit to for that saying (if you know please tell me) because I just read it on a friend's Instagram account. It has stuck with me and I've used it a few times in my lessons before with the Young Women.

All in all I think it was a good activity and I think the girls learned something and had fun. What more can you ask for, right?

Though I hope that when they look in their mirror's they will remember that as literal daughters of the most high king of the universe they can each be a Vashti. They can act with power and courage and say "no" to things or people who do not honor and respect their divine nature. When they find themselves in a "Vashti moment" I hope they will put on their crown and stand their ground, regardless of the consequences.

I hope that maybe this will be helpful to some of you who help plan Young Women activities. We are planning on doing this every fifth Wednesday so I'll try to share what we do. I think next time (which is in November) we will do Vashti's counterpart-- Esther.
Heather@Women in the Scriptures at 1:16 PM
Share