If You Ever Wanted to Learn Ancient Greek 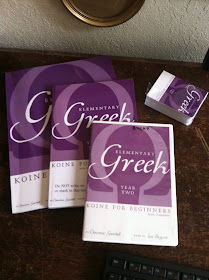 I've had a goal to learn ancient Greek for a long time. It first began with my high school journalism teacher who loved the language and would often write Greek words on the white board when he taught. My senior year I even convinced him to give me Greek lessons before school started, which he did for about a semester. My husband Jon even has a degree in Classical Studies (Latin and Greek) from BYU. When people ask why he studied something so obscure he replies, "To catch Heather", because I was completely attracted to him when I found out he was studying Latin and Greek. Turns out that he was better suited to be an engineer (which he got his Master's degree in). I'm pretty sure that if he'd been studying engineering when I met him that I wouldn't have given him a serious look. Sometimes he jokes that we should have switched majors in college, because I would have loved his classes... which is probably true.

Since I missed my opportunity to take Greek (and Hebrew) in college there haven't been very many other chances. I've still always wanted to learn it and to be able to read the New Testament in the original Greek. I am pretty good with a concordance, but I'd love to be able to read it for myself.

Last year one of my home school friends showed me the Greek curriculum that her 10-year-old son was doing. I skimmed through the book and workbook and got really excited. I knew that my kids weren't ready for something like that, but I sure was! When I ordered my curriculum that fall I ordered the first set for myself.

There are several different home school/home study Greek programs out there, but this one is really great. It is called "Elementary Greek: Koine for Beginners" by Christine Gatchell. There are several different forms of Greek and Koine is the form that is used in the New Testament, so the book is centered around preparing you to read the Septuagint, the Greek New Testament. 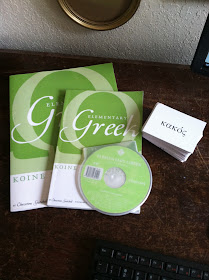 Even though I knew a little Greek already I started with year 1, which was a good idea because you really need to be strong in the basics. The complete set comes with a textbook, a workbook, a CD and a pack of flashcards. I debated about buying the CD and the flashcards but I'm glad I did. The CD is useful to help you know how to pronounce the words and the sounds and the flashcards are invaluable for practicing vocabulary.

Funny side note: I had a New Testament professor in college who was a whiz at ancient Greek (and about 30 other dead languages). He told us that one time he was in Greece and was trying to get the Parthenon, but he didn't know any modern Greek. Undeterred he went up the nearest Greek person on the street and asked them, in ancient Greek, where the bus stop was for the Parthenon. I guess that ancient Greek was close enough to modern Greek that the person understood him, but looked at him really funny because basically he had asked, "Doth thou know where the fiery chariot lands which will carry me to the temple of Athena?"

There are 30 sections in the workbook that are divided up into five assignments each week. Ideally you should do an assignment each day, meaning you'd finish the lesson in a week and all 30 lessons in 30 weeks. When I showed the curriculum to Jon's uncle, who is a professor of Greek at BYU, he said I'd probably go through it alot faster than 30 weeks.  I'm sure that if I'd been in a class I would have gone through things much quicker, but as it turned out I ended up doing about one lesson a week doing all the assignments at a time instead of splitting them up everyday. Mostly, because I didn't have time to work on it everyday. It took me most of the school year to finish the whole first year curriculum.

I have been really happy with the curriculum. I feel like it is really giving me a good basis in Greek and in preparing to read the New Testament. Each lesson gives you a memory verse from the New Testament to work on. I found those really helpful and it has been fun to open up the Greek New Testament and be able to read some of it!

I just bought the Year 2 books, CD and Flashcards and am excited to further my skills. I am really looking forward to getting into the Septuagint this year. It is amazing how much more understanding the original Greek can help you understand what the stories and messages are really about. After year two there is one more set, Year 3, in this curriculum which I intend to do next year. By the end of it I should be able to read much of New Testament and be able to use the Greek Lexicon (dictionary), which is exciting!

I'm not getting paid to share this. I have just been really happy with this curriculum and thought I'd pass it along for anyone who, like me, has harbored a desire to learn ancient Greek. It is simple enough for motivated kids and teenagers, but also challenging enough for adults. So if you're interested I'd highly recommend this curriculum.  In fact, Jon gets a kick out of watching me study because I usually can't help but blurt out, "Oh, I LOVE this." I really do. It fills my soul and makes me feel like I am going back in time and digging up hidden treasures.

Now I just need to find a similar type of curriculum for learning Biblical Hebrew! 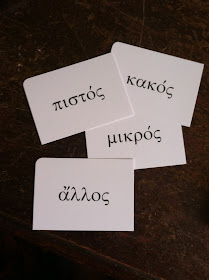 Here are links to the curriculum on Amazon if you are interested.