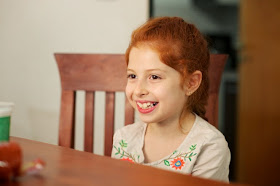 Last Sunday I substituted in Primary, the 6 and 7-year-old class. Our lesson was on the priesthood and its blessings. I started my lesson by making pinwheels with the children and talking about how there are powers (like wind) that you can't see but still have the ability to do powerful things. I then moved into making the example about how God's priesthood power is similar.  It isn't something we can see with our eyes, but that we can feel it and see it by watching what it does.

Not long into our discussion of priesthood a sweet little red-headed girl beside me pipped up and exclaimed, "Well, that isn't something girls get. I won't ever get the priesthood."

She said this matter of factually, without any trace of anger or disappointment, but there was something in my spirit that rose to the surface. I heard the unspoken question in her voice and knew I couldn't let this remark slide by. So I looked her straight in the eyes and said, "That isn't true."

By this time I had the whole class's rapt attention.

She thought for a moment and was just about to shake her head "no" when a smile spread across her face, "Girls get to go on missions!" she exclaimed.

"Right", I responded back, "and don't you think that Sister Missionaries need God's power to help them teach people, to help them answer people's prayers, and to do miracles." She nodded her head enthusiastically.

I turned to another little girl, whose mother was pregnant, and asked her, "What is your mom growing right now inside of her body?"

"And do you think that God is helping her to grow that baby? She nodded her head slightly. "Your right He is. He is helping her.  He is giving her power to make a new person, and God's power is priesthood power." I saw comprehension dawn on her little face and a smile come to her eyes.

I turned to the whole class and asked, "And what about the Primary president? Do you think that God gives her power to help know how to teach and take care of all the children in primary?"

As I talked I felt the spirit washing over me in waves and I knew that this was important for these children-- boys and girls-- to understand. I picked back up my lesson book and started to hand out coloring pictures of ways in which men use the priesthood power, a father blessing his baby, a boy passing the sacrament, and men giving a blessing. As I handed them the pictures I explained,

"Today our lesson is going to be about how boys use the priesthood power, because it is really important. We need the priesthood ordinances, like baptism, to return to our Heavenly Father and God has given  boys the very important job of administering ordinances. Heavenly Father has also given girls important jobs and power too, but today we are focusing on how boys use God's power to bless others."

Later that afternoon, as I thought about the conversation I'd had in Primary with those children about women and the priesthood, I started to worry. I didn't feel like I had said anything that wasn't true, and the spirit had been strong in that little classroom, but still I worried. I envisioned a situation in which they went home and told their parents that their primary teacher had told them that girls had the priesthood too.


In fact, I later found out from a friend that this had happened. Her son, when questioned that afternoon about what he'd learned in Primary said, "I learned that girls have the priesthood!" Needless to say his parents were a bit astonished and asked him to explain. "But", she told me, "He totally understood. He explained about what priesthood power was and that girls and boys used it differently, like when girls have babies or go on missions." She also told me that once she realized I'd been substituting his class, the conversation made a whole lot more sense.

It was exciting for me to see that these little primary kids were grasping an idea that I think is sometimes hard for grown men and women to understand.  Yet, it also dawned on me that there wasn't going to be a lesson in primary about how girls used the priesthood. There would be lessons on motherhood and the Relief Society (which are both part of a girl's priesthood responsibilities) but that the words priesthood or power would most likely not be used in speaking about their roles in God's kingdom.

And that made me feel a bit sad, because our girls need that lesson, and they need those words. They need to know they have access to power, real priesthood power. That they are not just passive recipients of priesthood blessings but that they too can channel and use God's power to work miracles, to bless, to heal, to teach and to move God's work forward. That power is available to them because of the covenants they have, and will, make. 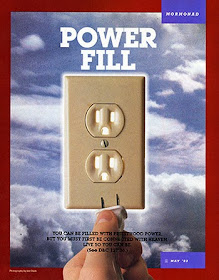 As I thought about this I wondered about why it seems so hard to talk about women having priesthood power. I feel like Elder Oaks made it really clear in his talk "The Keys and Authority of the Priesthood" that priesthood power and authority is not limited to men. He said,

And Elder Ballard also said, in an address at BYU Education Week, that,

Yet, somehow it still feels like a taboo topic, perhaps because we still don't really understand what it means for women to have priesthood authority and power without being ordained to priesthood offices like men. I think that we are still trying to  discover just exactly what our power is, and we use every other word for it besides the word priesthood power. But like Elder Oaks said, "what other authority can it be?"

Yet, the degree to which we get to use this power, or in other words the amount of power we have,  is based upon the degree to which we are obedient to God's laws. The more good choices we make, and the more covenants we make with God, the more power-- priesthood power-- our souls receive. Men can receive priesthood power and keys through ordination, but both men and women receive priesthood power when they go to the temple. The endowment of power we get in the temple is real power, and is equally accessible to both men and women who are willing to make sacred covenants to God.

It is true that men and women are different, and that our roles and our responsibilities are not the same. Men are ordained and set apart to priesthood offices, and have responsibilities that women do not have. The work men do for women through those priesthood offices is an incredible blessing, it allows both women and men to return to God's presence and to be with Him eternally. That is stewardship that God has given to men, and is one that blesses each of our lives in a powerful way.

Yet even though men have priesthood offices and stewardship that women don't doesn't make them unequal. When God sealed Adam and Eve in the garden of Eden he told Adam that Eve was his "helpmeet" which does not mean "helper." It is a Hebrew word that basically means, "a companion of strength and power who has a saving power and is equal with him.” Adam and Eve were both given the power to work saving ordinances for others.  I believe that is true with all my heart, and that when men and women kneel across the altar they are spiritual equals, endowed with priesthood power.

I think the challenge is finding the words and the ways in which to talk about these things. In many ways we don't even have words in our LDS vocabulary to talk about how women harness and use priesthood power. I think our inability to talk about it, to define it, or to even understand how it works limits our ability to use it.

Yet, I have hope that we will find those words. That as we pray, study, and continue to seek understanding that we will receive greater light and knowledge, a better and more complete picture of how God's priesthood power works upon the earth. I have hope that we will be able to help our daughters and our sons understand it in ways that will make them both mighty instruments for God-- fully aware of the power they wield and the responsibilities that go with that power. And I guess that means being brave enough to tackle hard topics... even in primary.