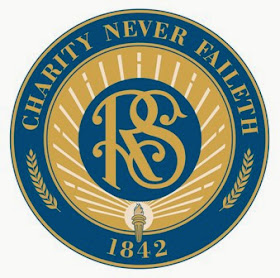 I am so excited for the FIRST ever General Woman's Meeting this Saturday. For the first time women from the Relief Society, Young Women, and Primary will all be meeting together for the first session of General Conference.

It is going to be a historic meeting!


As I have been studying the New Testament I have realized that we have lots of evidences that when Christ organized his church on the earth he also organized the women-- an ancient Relief Society-- whose purpose was to develop holy women and to help bring forth the great priesthood mission of the earth. In fact, the prophet Joseph Smith taught that,

Sister Eliza R. Snow, the second president of the Relief Society, repeated this teaching when she said,


“Although the name may be of modern date, the institution is of ancient origin. We were told by our martyred prophet that the same organization existed in the church anciently.” (Eliza R. Snow, “Female Relief Society,” Deseret News, Apr. 22, 1868, 1)

Not only is Relief Society an ancient organization, patterned after the way Christ organized women in his church, but it is, in fact, the female quorum of the church.  President Spencer W. Kimball taught that ,


“The Relief Society is the Lord’s organization for women. It complements the priesthood training given to the brethren.”

and Sister Julie B. Beck taught,

"The word society has a meaning nearly identical to that of quorum. It connotes “an enduring and cooperating . . . group” distinguished by its common aims and beliefs. When Joseph Smith organized the sisters, he told them that “there should be a select society, separate from all the evils of the world, choice, virtuous, and holy.” President Joseph F. Smith taught that Relief Society has its own unique identity and that it was “divinely made, divinely authorized, divinely instituted, divinely ordained of God to minister for the salvation of the souls of women and men.” (from "Why we are Organized into Quorums and  Relief Societies")

The Young Women's organization is the preparatory program to enter Relief Society, just like the Aaronic priesthood organization is preparatory for the young men to enter Elder's quorum. In fact, if you think back to what the ancient Relief Society would have looked like it certainly would have included young women. Right now our definition of when a young women enters Relief Society is based off her turning 18, the age in many Western societies when children are considered adults. Yet, anciently women were married around age 14, and by the age of 18 might already have had a husband and several children. This means that Relief Society of Christ's time probably would have included both young women and mature women.

So it is exciting to me to see that General Conference this year is expanding to include both the Young Women and the Relief Society women (and the primary girls!) in one meeting-- and unified under one purpose.

It will truly be a meeting of all God's holy women.

I promise you won't want to miss it!

If you want you can watch it live on Saturday by following this link.