The Lost Teachings of Jesus on the Sacred Place of Women 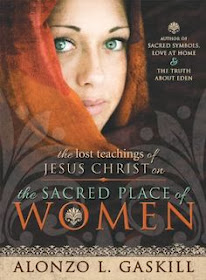 I was recently invited to review Alonzo L. Gaskill's new book "The Lost Teachings of Jesus on the Sacred Place of Women." The title really intrigued me and I figured that this book would be right up my alley.

This book isn't very long, only 112 pages. The first part of the book is Gaskill's introduction and the historical background behind the "Lost Teachings of Jesus." Out of everything in the book, I loved the history part the best. In fact I would have loved to have twenty more pages of the book dealing with it, but that is just the history nut in me. The text that Gaskill shares is taken from a manuscript brought from India in the late 1800's. A scholar named Nicholas Notovitch visited a Buddhist monastery there and learned of the existence of very old documents they had which contained the teachings of Jesus. In his book Gaskill explained:


"According to the monks, the content of these ancient texts was acquired by some Indian merchants who had been in Judea during the last year of Jesus's mortal ministry. Shortly after Christ's crucifixion, these itinerant importers returned to their homeland and told of the truths they had seen and heard. Within three or four years of Christ's death, the testimonies of those eye witnesses regarding Christ were recorded. Consequently, if their reports are true, then their record of Jesus's teachings was penned before any of the four Gospels." (Pg. 6)

This was just fascinating to me because I have often thought that there must be other accounts and records of Jesus Christ scattered across the world that we have yet to discover, or which have been lost. In fact, as Latter-day Saints we know there are additional records about Christ's teachings that we don't have yet, but someday will (see 2 Nephi 29:11-14). This book gave me a little glimpse into what those other books might contain, and it was exciting to see that among those teachings were beautiful truths about women.

These teachings were even more meaningful for me because for the last few months I have been engrossed in writing my book about New Testament women. As I have been studying and writing about the women in the New Testament I have felt, several times, that we must have lost something really important about Christ's interactions and his teachings about women.  There are many beautiful truths-- and  many more "bread crumbs" of truth-- about women throughout the New Testament, but it seems like there is something big missing. So reading these Lost Teachings was a great validation of my feelings, because I think they indicate that Christ probably did teach much more about women than just what we have in the New Testament. Which was really exciting to me.

The second half of Gaskill's book was his commentary on the content of the Lost Teachings. I enjoyed many parts of his commentary and appreciated how he drew on quotes from the prophets and apostles to show that, whether or not Jesus actually said these things, the truths contained in the Lost Teachings are supported by modern day revelation. I felt that was a really powerful part of his book. I also appreciated his attention to how these teaching apply to both women and men. Too often when we teach about women we forget that those teachings also apply to men. I appreciated that Gaskill made it a point to speak to men, as well as women.

On the other hand, I felt at times his commentary lacked the depth I was hungering for. There were a few times when he seemed to skim over the surface of the teaching, peppering it with quotes from General Authorities, when I would have liked to have dove deeper into the meat of it.  For example here are some  of my favorite verses from the Lost Teachings,


" The wife and mother are the inappreciable treasures given unto you by God. They are the fairest ornaments of existence, and of them shall be born all the inhabitants of the earth...

...woman being for you the temple wherein you will most earnestly obtain perfect happiness." (verse 16, 18)

How awesome is it that Christ calls women a TEMPLE, through which we obtain perfect happiness! That just made my little heart about jump out of my chest. I felt like this was one of the times where I would have loved to have seen more in depth analysis from Gaskill, or hear more of his own ideas. For me the verse brought up a myriad of ideas about what it means to me-- as a woman-- to have  Christ call me a "temple" and say that it is IN me that perfect (which is often the word that God uses to mean "eternally complete") happiness is obtained..

That just made a whole bunch of happy buttons go off in my heart!

These Lost Teachings really did more for me than just validate that modern day prophets teachings about how important women are in God's plan are true. Instead, they really helped illuminate and deepen my understanding of how God sees women.  In fact, when I first read through the Lost Teachings I had little light bulbs going off in my head left and right, and made Jon sit down and listen to me read the whole thing to him (there are 21 verses) and listen to my excited rambling.

Overall, I enjoyed this book and loved learning more about the Lost Teachings of Jesus. I also appreciated how it acted as a spring boarded to help me think about Christ's interactions with women differently.  I am looking forward to reading some of Alonzo Gaskilll's other books. My friend promised me I would love his other book, "The Lost Language of Symbolism", and so I will have to round up that one soon.

If you are interested in getting a copy of  "The Lost Teachings of Jesus on the Sacred Place of Women" you can  buy it on Amazon right now for only $11.99! It would also make a great Mother Day's gift... because it is only two months away ;)

You can also keep abreast of all of Alonzo Gaskill's latest news by following his blog, and if you haven't read this post by him... you might just be fascinated.