Right before we moved into our house my Mother-in-law said that someone asked her how long she thought it would take us to get chickens.  The answer...

A house just doesn't quite seem like a home without them. 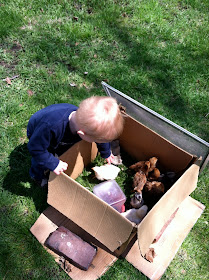 And we are so excited for fresh eggs again.

There really is nothing better.

We got eight little chicks, the breeds of which I am not quite sure. I had the stomach flu (not fun when you are pregnant) the day Jon took the kids to get them and he let them each pick out two for their very own. Asher chose the small black and yellow ones and named them "Jake" and "Fluff Ball." I will love it if Jake turns out to be a hen!  Rose chose the big yellow ones and at first named them something like "Tooloola" and "Ulalia" but she kept forgetting their names and so now they are "Lilly" and "Sunlight". The four red ones didn't get names, because Jon said if we have to eat them he doesn't want to name them. 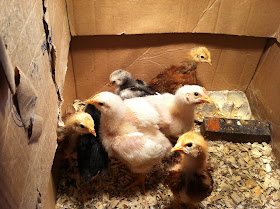 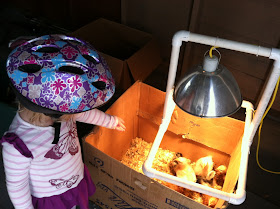 Don't you love our fancy brooder box? We realized that we must have given away all our chicken equipment in our last move and so we had to improvise. So far a cardboard box, a peanut bottle with a hole in it and an egg carton have been doing just fine!

We had a bit of a tragedy on Tuesday. We were transferring the chicks to a new cardboard box (because the other one got wet) and decided to let them run around in the yard for a few minutes. Asher wasn't paying attention to where he was stepping (and was a bit hyper) and accidentally stepped on one of the red chicks. I ran and scooped it up, thinking that it had just broken its wing, but quickly realized it was dying. I held it while it died, which wasn't very long.

Looking back, I think I could have handled the situation better. I was a little shocked that Asher had just (accidentally) killed our chicken, but even more upset that he didn't seem too bothered by it. He was actually trying to laugh it off, telling me that it would be okay. I realize now that it was his way of coping with the situation, but at the time it really annoyed me. Later I realized that it was the first time either of my children had seen something die. Asher had no idea how to process the experience and so his initial response was to laugh. Yet after we helped him dig a hole and bury it he couldn't stop talking about what had happened. I could tell that he felt bad for what had happened and was concerned about what was going to happen to the chicken. We had lots of conversations about death and the resurrection and in the end it really turned into an amazing teaching opportunity.


But one big question has gone unanswered. Asher has been asking me over and over again if the chicken will get resurrected and I have no idea what to tell him. Part of me just wants to tell him yes to make the whole situation easier to swallow, but I don't know for sure and I don't want to teach him wrong.

So far I haven't come across anything in the scriptures that indicates that the resurrection will include animals, but that doesn't mean it won't. Anyone have any insights or ideas on that one?

When we moved we decided not to take our couch or our loveseat. There were nice but I was ready for a change. So, last Saturday we went shopping for a new couch and ended up at a used furniture store. We found a really great overstuffed chair (that is PERFECT for reading in) and a nice couch that has a hide-a-bed in it, (so that we will have a place for guest to stay when they come visit).

They have been great, the only strange part is that they are both floral print fabric.

It didn't seem too strange when they were dozens of feet apart in the store but once we got them both home I realized that, counting the piano bench,  we actually had three different floral prints in the same room. 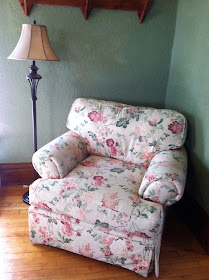 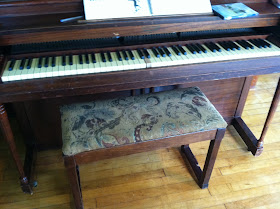 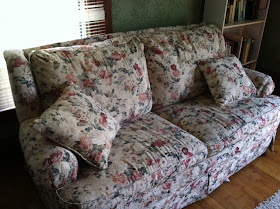 I am sure that this breaks ALL the rules of interior design and  could probably land me a place on one of those "can you believe this room" reality TV shows...  but oh, well.  They work and are comfortable. Besides I've decided that their subtle craziness sort of fits the theme of my life lately.

I have a hint for making a pregnancy fly by.

Move across the country.

I am about 20 weeks pregnant already and I feel like I have hardly even given this baby any thought.

Well, that isn't true. She kicks me often enough that it is hard to forget about her and it is hard to ignore my growing belly. Now that we are getting more settled I can actually start making plans for this little one!

I have been feeling really self conscious about being pregnant this time around. I find myself wearing my big coat every chance I get so that people can't tell. It makes me feel like did in 8th grade, afraid that someone might actually see what my blossoming body looked like under all that coat. But the truth is that I can't wear a coat for the next three months. Okay,  technically I could, but then I am  sure that a wool coat in August would make people wonder what was wrong with me, even more than toting around four kids under the age of six would.

I think I just need to own up to the fact that I AM going to be that woman in the store who people will look at and smile (or frown) and say, "Wow, she's got her hands full." I shouldn't let what other people think (or don't think) bother me, but I guess it do. It is probably because I have judged way too many other people in my life and so I know people do it!

And sometimes I just think I need to take a dose of my own medicine. I keep trying to remind myself of what I wrote here and remember that 1) felt the same way last time and I only had three kids then, 2) people probably aren't judging me, even if I think they are, 3) I really want this baby, and 4) it is okay to be different from other people, especially when you know you are on the right path for what the Lord wants you to do.

Now to just find a way to make that medicine easier to digest.

And Happy Mother's Day this Sunday!

And just a reminder.

Mother's Day is a day to celebrate YOUR mother, and the incredible gift of life she gave you. So whether you are a mother yourself or not enjoy the day and take the time to reflect on the blessing of your own birth and the influence your mother (or mothers) has had in your life. And if you can snuggle her close! 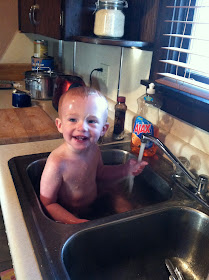