Breastfeeding Women in the Scriptures: Part 1

Several years ago I did a series on women's birth stories from the scriptures. It was really a wonderful experience to go through those women's stories and piece together their experiences. For some time I have been thinking it would be fun to do a series on the stories of women's breastfeeding experiences in the scriptures. I considered doing individual posts on each of these women but decided I would probably be most helpful to have them all together in two separate posts. I have chosen to only write about the stories of women breastfeeding, not the literary or prophetic verses that use breastfeeding images (of which there are many). If you would like to read some beautiful thoughts on the symbolism of breastfeeding I would highly recommend this.

I have tried to write about most of the women I know about whose breastfeeding experiences we have in the scriptures, but if I have forgotten any please let me know!


"And Sarah said, God hath made me to laugh so that all that hear will laugh with me. And she said, Who would have said unto Abraham, that Sarah should have given children suck? for I have born him age. And the child grew, and was weaned: and Abraham made a great feast the same a son in his old day that Isaac was weaned." Genesis 21:6-8


We often talk about the miracle it was that Sarah, a 90-year-old woman, was able to give birth to a baby. Yet, if the truth be told, that was only part of the miracle. How incredible it was that a 90-year-old woman was able to breastfeed her baby as well. It was just one of God's tender mercies to Sarah. Not only did he bless her body to open and give birth to a child but he also made it so that she could have the experience of breastfeeding as well, something she had probably yearned for for a long, long time.

It is also interesting to note that the tradition of holding a celebration when a child was weaned was very common in ancient cultures and is still practiced (in various forms) in several cultures around the world. Anciently, women typically breastfed their children until the age of three or four. Infant and child mortality was high due to disease and infection, but after the age of five a child's likelihood of dying greatly diminished,  and so weaning parties would have been held as a way to celebrate a child's safe passage through babyhood. It was also a time to acknowledge that the child was making a significant life transition and to express gratitude to the mother and to God for the miracle of breastfeeding.

I really love the idea of holding a weaning party. It has surprised me, every time one of my children stops nursing, how much I miss it. It is a time of incredible bonding and love between a mother and child and it is amazing to watch your body create food for another human being. I think it is beautiful that ancient cultures had a way to celebrate that. I know that several of my friends and have held their own weaning parties (here and here) when their children weaned and I think it is such an interesting idea. Maybe sometime in the future I will remember to do that! 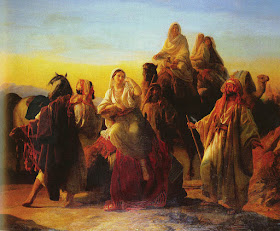 And they sent away Rebekah their sister, and her nurse and Abraham’s servant, and his men. Genesis 24:59

But Deborah Rebekah’s nurse died, and she was buried beneath Beth-el under an oak: and the name of it was called Allon-bachut. Geneis: 35: 8


When the word "nurse" is used in the scriptures it is usually referring to a woman who breastfed a child other than her own. In today's lingo we would call them a "wet nurse". Often times a nurse was employed to breastfeed a baby whose mother had died or who was too ill to sustain them. In the ancient world there was no such thing as formula and so a child's only hope at a healthy life was if another woman took the baby to her breast and fed it, often for several years.

Apparently something must have happened that necessitated a wet nurse for the baby Rebekah.  We know that Rebekah's mother was living at the time Rebekah was married and so we can only speculate on why Deborah was chosen to nurse her. Was her mother ill sometime after her birth? Was her mother unwilling or unable to breastfeed? Also, who was Deborah? Was she a servant or another member of the family? Did Deborah have her own baby that she nursed alongside Rebekah? Or had Deborah lost her own child and so had an extra supply of milk?

No matter what the circumstances it is evident that Debroah and Rebekah shared a unique bond. Not only does Debroah go with Rebekah when she is married into Issac's house but the book of Genesis specifically mentions her death and gives the place of her burial. Normally death announcements in the Bible are reserved for the great patriarchs and their wives.  She must have been a great influence in Rebekah's life and a great women to be so remembered. It also goes to show how highly valued the role of a wet nurse was in the ancient world.

I had an experience that gave me a little taste of this. I was in the hospital for several days when Asher was just a few months old. I was taking strong medications and so I couldn't breastfeed him. I had to "pump and dump" all my breastmilk in order to keep my supply strong. During this time my sweet sister-in-law, knowing how important breastfeeding was to me, took Asher to her own breast and fed him along with her six-month-old daughter. I didn't know about it at the time (I was groggy with drugs) but when I found out afterward I felt such immense gratitude to her. She laughed and said it had been a little weird, but that she was glad she could help us. That experience gave me a little glimpse into the gratitude that women would have felt for the wet nurses who sustained their children. It would have been an experience that brought women (and babies) together in a very unique way.


Jochebed was the mother of Moses. After hiding her son for three months from the Egyptians, who were ordered to kill all male Hebrew babies, she chose to hide her son in an ark and place him where he would be found by the daughter of the Pharaoh. When the princess saw the baby, and easily identifed him as a Hebrew baby (he would have been circumcised), she sought  out a nurse to feed the him. In the apocryphal book of Jasher it says that after finding baby Moses Pharaoh's daughter tried to find a nurse for him among all the Egyptian women but that he would not suck from any of them (Jasher 68:19-20). Perhaps by three months he already a nipple preference and could tell that none of those women were his mother! At any rate,  Moses' sister approached Pharoah's daughter and asked if she could try to get a nurse for him from among the Hebrew women. Pharoah's daughter told her to go and, of course, Miriam came back with Jochebed. It stands to reason that Pharoah's daughter would have know (or highly suspected) that Jochebed was Moses' mother. Who else would Miriam go get from among the Hebrews for a baby who wouldn't nurse for anyone else?  Yet Pharaoh's daughter also knows that Jocebed can not keep her baby and that in order to live Moses will need both of them to be a mother to him.

It is just beautiful to me that God cared enough about the bond that Jochebed had with her son that he would find a way for her to continue breastfeeding him. Not to mention get paid for it as well! Double bonus.


Sariah and the Women in the Wilderness 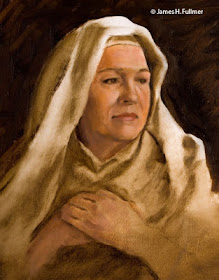 And so great were the blessings of the Lord upon us, that while we did live upon raw meant in the wilderness, our women did give plenty of suck for their children, and were strong, yea, even like unto the men; and they began to bear their journeyings without murmurings. 1 Nephi 17:2


...And Jacob and Joseph also, being young, having need of much nourishment, were grieved because of the afflictions of their mother; and also my wife with her tears and prayers, and also my children, did not soften the hearts of my brethren that they would loose me. 1 Nephi 18:19


The fact that Nephi specifically takes the time (remember he is engraving on gold plates here) to mention that "our women did give plenty of such for their children" show that not only did Nephi understand and appreciate the blessing of breastfeeding, but it indicates that there may have been a time in their travels when these women did not have enough milk to feed their babies. Nephi states that their women, " suffered all things, save it were death" which probably included the death of children, starvation, and being unable to feed their children. It is heart breaking to think that they may have lost babies because they were too weak or malnourished to produce milk for them. Yet, considering that possibility also lends more weight to why Nephi would take the time to comment that their women did give plenty of suck for their children.

Also in 1 Nephi 18:7 Nephi records that his mother, Sariah, gave birth to two sons named Jacob and Joseph while they were traveling in the wilderness. Even if we give Sariah wide margins, say have her married at the age of 16 (normal would have been 14) and Laman and Lemuel not getting married to the daughters of Ishmael until they were around 20 (normal would have been 17),  it still only makes her about 37 or 38 at the time she leaves Jerusalem with her husband. So, even though by today's standards Sariah would have been "advanced maternal age", she still would have been in her childbearing years.

Nephi also states that his family wandered in the wilderness for eight years before the embarked on the ship for the promised land. This means that Jacob and Joseph would have been under the age of seven and it is likely that one-- if not both-- of them were still breastfeeding at the time of the trip on the ship. It is possible that when Nephi speaks of the "nourishment"  Jacob and Joseph were lacking he was thinking of the actual sustenance that they got from breastfeeding. Also, if Jacob and Joseph were older, he may have meant "nourishment" as in the emotional nourishment that a mother provides her children with as well. Breastfeeding, especially in the toddler years, isn't just about food but is mostly about security and love. That may have been just what Jacob and Joseph were lacking for while their mother was afflicted because of the wickedness of her older children.


Coming up in part 2... Hannah, Naomi, Mary the Mother of Jesus, Joash's Nurse and Gomer!