An Angel in the Hallway 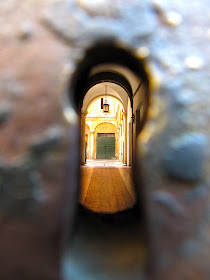 Several nights ago I decided to make bread before bed.

I quickly threw together a batch of bread, confident that I knew the recipe off the top of my head,  and stuck it in the bread maker. I turned the machine onto its longest setting and went upstairs to get ready for bed, intending for the bread to cook while I was alseep. Jon came up shortly after and we watched a movie together. After the movie was over we sat in bed and chatted for awhile. Then I heard a strange noise downstairs. It sounded like someone was rustling the blinds.

He quieted down and we listened, but couldn't hear anything.

"I just thought I heard something downstairs."

"Must have been the bread machine."

Jon went into the bathroom to brush his teeth. I was laying in bed with our door open and I heard the hall floor squeak. I sat up thinking that it was Jon coming back into the room, but when I looked there was no one there. I listened and could hear that Jon was still in the bathroom. "Strange," I thought to myself. The floor had squeaked just like it does when someone was walking on it, but there was no one there.

Not long after Jon came back in and with a strange look on his face asked, "Was that you in the hall?"

"No, I have been laying right here the whole time. But you heard that too?"

"Yeah, someone walked down the hall."

"I heard it, but I figured it must have been you in the bathroom."

We both got the chills.

Not only had we heard something in the hall but we could both feel that there was most certainly someone else in our house.

Me, being the brave soul that I am climbed further under the covers and sent Jon to investigate. He turned on the hall light and slowly started down the stairs, even calling out a tentative, "Hello? Who is there?"

As he progressed down the stairs a thousand horrible possibilities flooded through my head.

"We haven't gotten the locks changed yet, what if someone has a key."

"What if they are a crazy uncle who is angry we bought the house."

"What if Jon gets shot?"

"Where would I hide?"

"How would I keep the kids quiet?"

"Maybe we could climb out the window on to the porch...."

Then I heard, "Wow. Oh wow. Man. Wow" coming from down stairs and I was out of bed and down the stairs like a rocket.

"Jon, what happened? Are you okay? What is it. Did you find them?"

"Yeah, Heather. Everything is okay but look at this."

He pointed to the bread machine, which had "walked" itself underneath the cupboard, and was pouring out a pillar of smoke. He opened it up and we saw that my hastily thrown together bread had risen too much and that the dough had overflowed in great quantities onto the heating element.  Jon quickly pulled it out and doused the thing with water and then looked at me seriously, "This thing probably would have caught fire, it still has almost an hour and half left on the bake time. And being right underneath these cupboards it probably would have lit them right up. I wonder why the smoke alarm didn't go off."

"I know" I said. "I checked them today and replaced the batteries but I couldn't get them to work. I was going to ask you to look at them when you got home... but I forgot."

We watched the smoldering bread machine for awhile, feeling slight terror at our near escape,  and then Jon said, "You know... there was someone in the hall.  I felt them as I came down the stairs. I think we just had a visit from a guardian angel."

The truth of those words rushed over us and brought us to our knees in gratitude.

There have been several times in my life when I have felt the presence of guardian angels. Yet, every time I see their influence in my life it humbles me to my core.

Who are they? What type of power and influence are they allowed to have? Can they rustle blinds and squeak old floors if needed? And how many other small, seemingly insginficant, promptings and occurances in my life are really whisperings from a divine being?

All I do know is that I am so grateful for the angel who walked our hall that night.