Five Things for Saturday, Made it to Iowa Edition

We are in Iowa now!

It has been a crazy month of transitions and traveling and so it feels really wonderful to be settled into our house.  Transitions are always hard, but it is amazing how right and good this house, this community, this ward, this situation feels. It feels like we have come home, like this has been waiting for us all along. I have been so overcome with gratitude the last week as I have come to see that the Lord has answered every desire of my heart.  And I am not the only one who has randomly broke out with a " I love our Iowa house!", I think we all feel good about being here. Now if they could only invent a faster way of traveling, say teleporting, so we could still be close to family everything would be perfect!

Our trip out here went really well. The kids did much better on the drive than I expected them too. Abe especially did much better than I thought he would. He spent the majority of the trip looking out the window and singing songs to himself. I had been expecting him to get stir crazy and melt down, but except for two little incidents, he was a happy kid the whole way. If truth be told, the one who had the biggest break down on the trip was me.

We had planned to drive from Salt Lake to Cheyenne, Wyoming the first day, about a 6 hour drive. Well we showed up in Cheyenne at about 7 PM and stopped at the first hotel we came to. Our plan was to drop off our bags, go get some dinner, and then come back to the hotel to swim. No such luck. The hotel manager informed us that there was a Future Farmers of America convention in town and that all the hotels in town were full, except for one. He gave us the name of a that cheap hotel and wished us luck. Well, to make a long story short it took us three hours to find the hotel ( and to confirm that every other hotel was full) only to discover when we got there that it was now full too. Needless to say, Mom broke down at this point.

It was now 10:30 PM and we realized our only option was to drive two and half more hours to the next town and find a place to stay there. We stopped at a grocery store, changed the kids into their pajamas and got something to eat for dinner. When we explained to the kids that we were going to have to stay in the car for several more hours, and there would be no swimming that night, there were tantrums all around. Until, the thought came to me that we were just like Mary and Joseph, and there was no room for us in the inn. It was sweet to see that idea take hold in the kids minds and to hear Asher comfort Rose by saying, " It is okay we are just like baby Jesus, there was no room for him either."

At 1:00 AM we finally pulled into a hotel and hit the sack. We were grateful to finally have, what we have dubbed, " That Night in Cheyenne" over and done with. Hopefully never to be repeated.

After that our trip was fairly uneventful, except for the fact that when we pulled into town we got a call from the bank informing us that they wouldn't be able to close on our house that day like we had been planning on, but that it would still be three or four days till we could close. After processing the fact that we were now homeless and that all our worldly possessions were sitting in a truck with no place to go, we found a hotel that gave us a good rate for several nights. Though I did just about die when they told me that we would have to leave by Friday because after that the whole hotel was booked for a Future Farmers of America convention. Really?!

Fortunately we only had to stay in the hotel three nights (and with one of Jon's coworkers two nights) before we were able to move in. I just about wanted to cry when we left the bank with the keys in our hands. There is nothing like being homeless that makes you more grateful for a home. 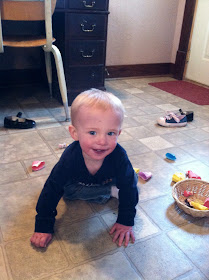 Though I will say that the first Sunday we went to church here has gone down on the books as the worst Sacrament meeting of my life, thus far. By the time our first Sunday had rolled around we had been traveling for a week and a half and had been homeless for several days, the kids were fried emotionally and physically.

I knew things were going to go bad when the first thing they did upon entering the church building was run into the chapel and start crawling under all the pews. When Jon and i tried to get them to get out they just giggled and tried to hide under them. After that it just got worse, with the climax being when both of them ran circles around the chapel giggling uncontrollably during one of the talks. I wanted to die. I had hoped to make somewhat of a good impression our first Sunday, at least make it look like we raising children and not wild hyenas, and so I was mortified. Even when I took them out in the hall to play in the nursery room it didn't get better. They started a royal brawl with the other little boy who was in there and I am pretty sure that Abe knocked him on the head several times with a car before I could break it all up.

Yet you know what, I think the people in this ward  still like us. They have seen us at our worse and they are still excited to have us, and our wild hyenas. They even seemed thrilled  when they found out I was crazy enough to be pregnant with another one, which  makes me love them. Alot.

When we get more unpacked and settled in I will give you a tour of our new place. It is a really neat 100 year old farm house, which satisfies Jon and my " old house delusion disease" yearnings. Sometimes I think we have a problem because old houses, along with all their problems, seem to make us giddy with glee.

Maybe we are just old fashioned.

Our house in on seven acres just on the edge of town. It is perfect because we are still connected into city utilities and ave neighbors but we still get to live in the country. It is still about an 18 minute commute for Jon to get to work, but instead f driving a billboard, traffic packed freeway he gets to drive on beautiful country roads, which, i am finding out, is 100 times better for his mood.

Here is the view out my back window. 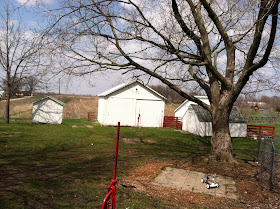 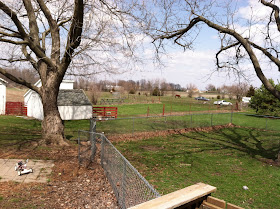 We have a five acre field that we have absolutely no idea what to do with. Jon is excited about the idea of getting a tractor, but I told him we have to pay for a baby before we get a tractor. So maybe next year. This year I think that we will probably let  some of the men in our ward plant alfalfa for their horses. Jon is hoping they will teach him how to do it  and maybe let him drive the tractor.

The neighbors next door have horses and Abe loves to watch them. He can often be found near a window like so 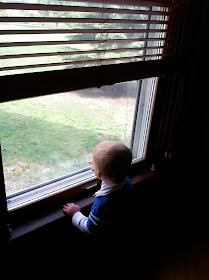 watching them and saying " woof, woof". We have been trying to teach him that horses say " neigh" but most of the time he still woofs at them every chance he gets.

Speaking of dogs the kids favorite part of our house in the doggy door. They prefer entering and exiting the house through it than using the real door like any civilized human being. Which, I guess is okay because, since I never plan on getting a dog ( especially one that would be invited into the house) that might be the only use it gets. 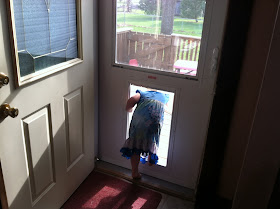 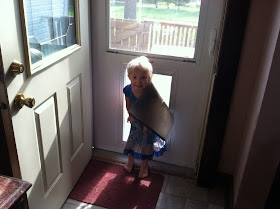 One last story about Rose. Last week I curled her hair with the curling iron and afterward she looked in the mirror and frowned. "I look like a grandma! Not a little girl." It took me awhile to convince her that she did look cute and that looking like a grandma wasn't such a bad thing. 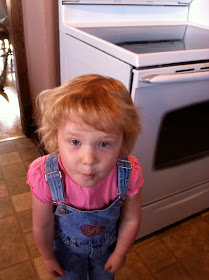 Oh,  I love that little girl.

Even when she drives me crazy.

Hope you have a wonderful weekend!