A Treasure Box with Two Keys

I loved the First Presidency's Christmas Devotional last night. Listening to it always puts me in the right frame of mind and heart for Christmas. If you missed it you can watch the broadcast here.


I was especially touched by Elder Eyring's talk and his recollections of a Christmas that he worked hard to create a very special "Family Treasure Box" for his wife. 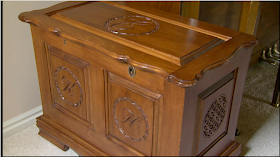 He said that the box (which is now filled with family pictures and sheet music) is a reminder to them of their love for one another and for the Savior, whose sacrifice makes eternal marriages and families possible.

I was very touched by the evident love and feeling that Elder Eyring had for the gift he gave his wife and absolutely love the beautiful symbolism he wove into it.

I am not sure if this box was made before Elder Packer gave this amazing talk about the roles of men and women in 1993, but I couldn't help but see the parallels between Elder Eyring's "Family Treasure Chest" and the parable that Elder Packer gave at the end of his talk.

I am posting the parable here, in case you have never read it before. I think it is one of the best explanations of the different stewardships men and women have and how God expects us to work together-- in marriage and in His kingdom. I wouldn't be a bit surprised if this was the inspiration behind Elder Eyring's box!


"Once a man received as his inheritance two keys. The first key, he was told, would open a vault which he must protect at all cost. The second key was to a safe within the vault which contained a priceless treasure. He was to open this safe and freely use the precious things which were stored therein. He was warned that many would seek to rob him of his inheritance. He was promised that if he used the treasure worthily, it would be replenished and never be diminished, not in all eternity. He would be tested. If he used it to benefit others, his own blessings and joy would increase.

In due time, there came a woman into the vault. She, too, held a key. It was noticeably different from the key he held. Her key fit the other lock. It humbled him to learn that he could not obtain his rightful inheritance without her.

They made a covenant that together they would open the treasure and, as instructed, he would watch over the vault and protect it; she would watch over the treasure. She was not concerned that, as guardian of the vault, he held two keys, for his full purpose was to see that she was safe as she watched over that which was most precious to them both. Together they opened the safe and partook of their inheritance. They rejoiced for, as promised, it replenished itself.

With great joy they found that they could pass the treasure on to their children; each could receive a full measure, undiminished to the last generation.

Perhaps some few of their posterity would not find a companion who possessed the complementary key, or one worthy and willing to keep the covenants relating to the treasure. Nevertheless, if they kept the commandments, they would not be denied even the smallest blessing.

Because some tempted them to misuse their treasure, they were careful to teach their children about keys and covenants.

There came, in due time, among their posterity some few who were deceived or jealous or selfish because one was given two keys and another only one. “Why,” the selfish ones reasoned, “cannot the treasure be mine alone to use as I desire?”

Some tried to reshape the key they had been given to resemble the other key. Perhaps, they thought, it would then fit both locks. And so it was that the safe was closed to them. Their reshaped keys were useless, and their inheritance was lost.

Those who received the treasure with gratitude and obeyed the laws concerning it knew joy without bounds through time and all eternity." (Boyd K. Packer, "For Time and all Eternity", Ensign, 1993.) 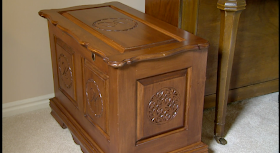