When I was 15 I begged my parents to buy me a red wool coat. The one I wanted was expensive, really expensive, and so I used every ounce of my persuasive power to convince them that I had to have that coat or else my life would be over. My persistent pleas worked and on Christmas morning I found myself the owner of a beautiful red wool pea coat.

Pea coats had yet to come into high fashion in my High School and so when I wore it to school I was the only one who had one. That made me feel important and I loved it that I got lots of compliments about how classy and old fashioned it made me look.

I really loved my coat.

The next year at Christmas time I was sitting in Sunday School when my teacher told a story about President Heber J. Grant as a boy. Apparently when President Grant was young he needed a new coat badly but his family was too poor to afford one. His mother finally manged to get him a beautiful new coat but the first day he wore it he met a boy who didn't have any coat. Without hesitating Heber took of his new coat and gave it to the boy. When he got home he told the story to his mother and she imploring asked why he couldn't have given him his old coat instead of his new one. He didn't say anything in response but just looked back up at her, and then she said, "No Heber, you couldn't have done that, could you?" She knew her son's heart and knew that his love for others was greater than his love for himself.

After church that day as I stood in the foyer putting on my red coat I asked myself if I, like President Grant, would have given up my new, treasured coat when I had an old one sitting in my closet at home. To my dismay I realized that parting with my coat would be really, really hard for me. In fact, I probably wouldn't give it up. If faced with a similar situation as President Grant I saw myself running home to get my old coat and giving that one away instead. A person without any coat, I rationalized, would just be grateful for any coat and wouldn't care what color or style it was. There would be no need to give up my new coat when I had a perfectly good old coat at home.

This week was full of birthday and Christmas parties and by Sunday evening we had a house full of Grinches. After listening to our children beg and whine unceasingly for even more presents and even more candy Jon and I realized that we weren't doing a good job about teaching our children that Christmas is about giving and not just receiving.

Actually, we were pretty much failing at it.

So yesterday I helped Asher and Rose go through their toys and pick out things that they would like to donate to the local women's shelter. I explained to them that there are children in our city who don't have any toys. I told them that since Heavenly Father has blessed us with so many toys it would make Him happy to see us share what He has given us. Asher got really excited about this and enthusiastically started rummaging through his toys.

He opened his box of toy cars and I was surprised when instead of picking out a handful of his least favorite cars he brought me over his three most coveted cars. These were the cars that he had played with nearly every single day for the last few months, the cars that he never let his sister play with, and the cars that when one got misplaced everyone had to stop what they were doing and search for it.

He brought them over to me and said, "I want to give the boy who doesn't have any toys my cars."

My first reaction was to say, "Oh, Ash not those cars. You have lots of cars, you don't have to give your favorites away" but I caught myself just in time. I swallowed my greed and instead asked him,

"Are you sure Asher? You know that you won't get them back if you give them away."

He looked at me with the sweetest simplest face and said, "Yeah, Mom but I have lots of toys." Then without missing a beat he broke out the wrapping paper and personally wrapped all three of his little cars up for the "boy who doesn't have any toys." Afterwards he also chose some other nice toys to donate and made sure they were all wrapped up and put in the bag with his cars. 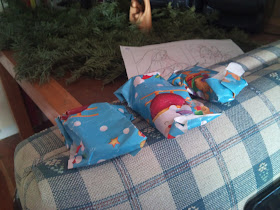 As I watched him wrap up his favorite cars to give to a little boy he's never met my heart melted.

Already at age four he has already learned a lesson that I, as an adult, am still struggling to learn.

His innocent kindness reminded me that it is when we give those things that are dearest to our hearts that we really give a gift worth giving. And the times when those gifts are hard to give are the times when we understand the true meaning of "charity" and become a bit more like our Savior.

My red coat is still hanging in my closet.

I'd like to think that now if I ever found myself in the same sort of situation as President Grant that I'd give up my coat in a heart beat. Yet, even as I write this, a part of me hesitates. I know that deep down inside I am still attached to that red coat. Giving it up would be hard for me. Yet I hope that when it came down to it that I could give it up joyfully ( regardless if the other person appreciated it or not) knowing, like my son and President Grant did, that it is truly more blessed to give than to receive.

Do you have a "red coat"? Would it be hard for you to give up? Do you think you could do it?
Heather@Women in the Scriptures at 1:38 PM
Share