Latter-day Saint Women Around the World: Sarah in Tunisia

I still have quite a few more submissions to share for my Latter-day Saint Women Around the World series and am expecting to receive a few more in the next little while! It has been so much fun to get to hear about the different experiences women are having all over the world with the gospel.

Today's post comes from Sarah who just got back from living in Tunisia with her young family. My husband and I lived in Jordan for a summer and so I loved her perspectives about how similar Muslims and Latter-day Saints are... it is so true! 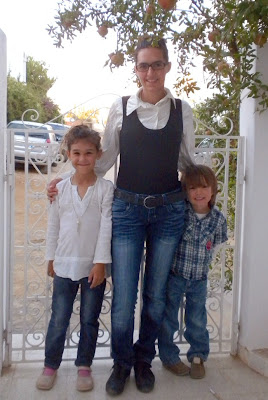 I have a husband and two children, ages six and four. We are originally from California, but we love to travel, and have lived in several different countries. Most recently, in September we got back from an eight-month stay in Tunisia. What with the revolution and the first big steps toward democracy in the country, It was a very exciting time to be there. You can read about our adventures, both scary and fun, on my blog: Casteluzzo.com.

The vast majority of Tunisians are Muslim. Many are devout, but the country is fairly secular. It is common to see a woman in a headscarf walking with another dressed in Western clothing. Tunisians are very tolerant of different beliefs, and enjoy talking about religion, both their own and other people's. Their day of prayer is Friday, but they do not have a tradition of closing their shops, except during prayer times and holidays (of which there are many), and during the holy month of Ramadan. Mosques are very well attended.


2. How long have you been a member of The Church of Jesus Christ of Latter-day Saints? If you are a convert please tell us a little about your conversion. If you were born in the church tell us a bit about your family and who was the first in your family to join the church.

I've been a member my whole life. Both my husband and I come from families that have been members since pioneer days. I've always heard that "the Church is the same wherever you go," which is true in all the most important ways. But I've really enjoyed going to church in other countries, and all the delightful little differences and things I learn from the members there.

3. What is the LDS church attendance like in your area?

There is no organized LDS church presence in Tunisia. Before we moved there, we contacted the Church's Middle East/North Africa Desk, which gave us the emails of a few members living in the country. We met in a private home, with a couple of other young families and single members. All of the members were Americans who were in Tunisia temporarily for employment. Average attendance was 10-12. We traveled the farthest, and it took us about an hour and a half to get to church most Sundays. We arrived the week after the popular revolution ousted the dictator, so for our first several weeks we had to dodge protests and stop at police checkpoints on our way to church. Yes, it was exciting.
Another Mormon family moved to Tunisia right after we did, so between them, us, and the family who had been there already, we had six children under the age of twelve. We organized a little Primary for them, and the parents took turns teaching. Another member volunteered to do Sunday School lessons each week. For Sacrament Meeting, the Sacrament was blessed and passed by two of the men (we were fortunate to have several Priesthood holders), and then we watched a talk from the most recent General Conference. Some weeks we held testimony meetings instead. Because there were so few of us, everyone always got a chance to bear testimony, and those were some of our most special and spiritual Sundays. 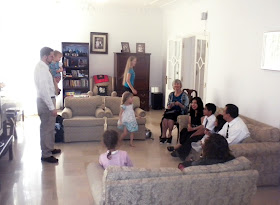 Sometimes I missed the security of a gigantic ward, but I actually loved having the chance to live somewhere with such a tiny congregation of members. We cherished the opportunity to meet together, and had many wonderful discussions and experiences. It reminded me of the very first Christians, who must have met together under similar conditions. In fact, many of those early Christians actually lived in Tunisia. The country is rich in Roman ruins, and some of them contain beautiful Christian mosaics. We also saw an incredible tiled baptismal font--meant for immersion baptisms! I am sure that many Tunisians today are descendants of those first brave Christians. It will be interesting to see what happens when Tunisia opens up for missionary work.

4. How far away is the nearest temple? When was it built? How busy is it? Do most people in your country know about it? What are their feelings about it?

The nearest temple . . . honestly, I don't know. Very far. We were not able to attend the temple while we were there. When the Rome temple is finished, it will be by far the closest, at a couple of hours by plane, or overnight on the ferry.

5. What sort of reaction do you get from most people when they find out you are Mormon? Are people familiar with the church? Do you often have to defend or explain your beliefs?

None of our Tunisian friends had ever heard of the Church. But they were very open and willing to talk about it. The LDS church generally discourages members in Middle Eastern countries from engaging in active missionary work, so we only ever invited our expat friends (non-Muslim) to church with us. But we had many conversations with Tunisians about our beliefs. We found that we actually have many things in common with the Muslims we met. They too avoid alcohol, dress modestly, fast, and pay something like tithing. I did a blog post over at Times & Seasons several weeks ago on other similarities between Mormons and Muslims.

There are no missionaries (not even service missionaries) presently in Tunisia. I hope that with their new democratic government, the LDS church will be able to build some bridges. Maybe my children will be called on missions there someday!

7. How many families do you know (LDS or not) who have more than two children? If a family with four children moved to your area, would their family size seem unusual? What about a family with six children?

Tunisians love children, and large families are common. Four children would be perfectly normal. Six might be a little large in the city, but not in a smaller village.

8. How many sisters do you visit teach? Do you have to travel far to reach them? What have been some of your best visiting teaching experiences?

We didn't have an organized unit (we called our group the "Tunisian twig"), so nobody had formal callings, including visiting teaching. But we treasured our Sunday meetings, and always stayed afterwards for social time. We often had potlucks too, or met up outside of church for play-dates and other activities. Living so far from family, friends, and familiar things, we really valued getting together with the only other Mormons in the country.

9. What are the greatest challenges the sisters in your Relief Society are facing?

I think the biggest challenge for me and the few other sisters in our "twig" was just adapting to life in a very foreign country where we didn't have too large of a support system.

10. What is the greatest blessing that the gospel of Jesus Christ has brought into your life?

A forever marriage. There are so many forces trying to tear families apart, and knowing that we have been sealed together helps us to keep an eternal perspective, especially when we're far from home and sometimes feel like we don't have anything but each other.
Another reason I love belonging to the Church is that it is an instant support network, practically anywhere in the world. Moving to a new country is fun and exciting, but it can also be lonely and hard. Having even a few friends who share something as important as the Gospel cuts down on the culture shock and makes me feel at home. Even when languages differ and communication is difficult, the music is familiar, fellowship is felt, and the Spirit speaks equally to all.

Thank you so much Sarah. It will be exciting to see where you guys go next!
Heather@Women in the Scriptures at 6:00 AM
Share