Latter-day Saint Women Around the World: Emma Lucy in Bosnia

Today's guest post is by my husband's cousin Emma Lucy. She, along with her family, just recently returned home to United States after having lived in Bosnia and she just started her Freshman year of college! Hearing about her adventures has been a lot of fun and so I was excited she was willing to share her experiences with the LDS church there, especially because while she was there Bosnia was dedicated by Elder Nelson for the preaching of the gospel! 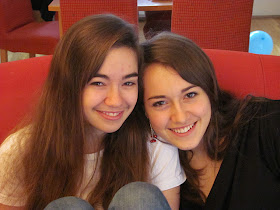 I come from a very observant LDS family with six children. We’ve moved around quite a bit, following my father’s work, and we have twice lived in Sarajevo, Bosnia. The first time, I was eight years old (I was actually baptized in Sarajevo, in a bathtub since we didn’t have a meetinghouse), and the church had no presence whatsoever save for my family and a few people living on a military base. We returned recently to spend a year there, and the church was both slightly larger and much more organized.

Bosnia is a predominantly Muslim country, although there is a significant Jew and Orthodox presence as well, especially within Sarajevo, which prides itself on its “triangle” of worship places (a section of town in which a mosque, a synagogue, and a cathedral are in close proximity to each other). In rural areas especially, Muslims tend to be strictly observant, but many people in the bigger cities are laxer in their adherence. Alcohol usage is quite high, and a significant number of women don’t wear the veil. At the same time, though, many believe very strongly in their religion and I had some friends who didn’t wear the veil but were very passionate in their faith. Almost everyone I knew identified themselves as religious, but there were a few who didn’t attend mosque regularly or pray five times a day, and Sarajevo as a whole would feel like quite a secular city were it not for the number of religious buildings, especially mosques. There are hundreds of mosques in Sarajevo, and the hauntingly beautiful call to prayer brings an element of faith into the lives of even the least religious.

Based on my admittedly limited observations, the rising generation in Bosnia is much less religious than the older population. This is understandable, as it was religious as well as ethnic tensions that caused the horror of the recent war in Sarajevo. Many of my teenage friends seemed to feel that shedding those ethnic tensions was impossible without also losing some religious fervor.

2. How long have you been a member of The Church of Jesus Christ of Latter-day Saints? If you are a convert please tell us a little about your conversion. If you were born in the church tell us a bit about your family and who was the first in your family to join the church.

I was born in the covenant, and on my mother’s side, my family has been LDS all the way back to the pioneers. My great-grandfather on my father’s side, however, was a second-generation Portuguese immigrant and a convert.

3. What is the LDS church attendance like in your area? How many stakes, wards, or branches are there in your area? On an average Sunday how many members attend church? Do people have to travel far to attend church? What are the demographics of your ward? Are most members young, old, married, single, are there more women then men? Or it is it a good balance?

Bosnia’s first branch was organized in September of 2010 by Elder Nelson, who came on a four-day trip through Eastern Europe during which he dedicated six countries for the preaching of the gospel. The branch in Sarajevo is the only currently existent branch, and at the time it was organized it had a membership of about a dozen. We only had one inactive member, but almost all of our members were American, as well, and all the Americans lived fairly close to our meeting place, which was in the embassy home of one of our families. Our few Bosnian members were further away and it was often very difficult to get them to church. Our demographics were quite diverse, however: we had two American families with children from five to eighteen, and then a few adults who were either single, married to nonmembers, or the only member of their family in the country, and there was a pretty even balance between men and women.

4. How far away is the nearest temple? When was it built? How busy is it? Do most people in your country know about it? What are their feelings about it?

The nearest temple to Sarajevo is several countries away, in Frankfurt, Germany. The Frankfurt temple was built in 1987, but I don’t know how busy it is because the distance makes it very difficult to attend. It’s not really within the reach of most Bosnians because it’s so far away; in fact, the only Bosnian that I met who knew about the temple at all was a young man who grew up a few blocks away from the Hong Kong temple. He told me that the temple was beautiful, but he was confused by its role in our church.

5. What sort of reaction do you get from most people when they find out you are Mormon? Are people familiar with the church? Do you often have to defend or explain your beliefs?

Most Bosnians are unfamiliar with the church although the people of Sarajevo, and especially the younger group that I spent most of my time with, were more aware. Still, only those who had lived outside of the country could really be expected to know about the church or to understand it to some small degree. Those were very willing to listen to explanations of my belief and were eager to have religious discussions, although their interest tended to be more intellectual than faith-oriented. On the other hand, the older generations and those from rural areas tended to be more distrustful or even hostile to our faith. 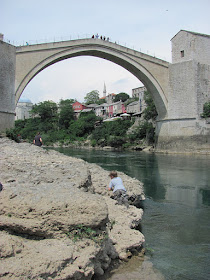 The church hasn’t actually gotten through the bureaucratic channels to get permission to bring missionaries into Bosnia yet, although there is a single senior couple there right now who are trying to get all the paperwork done. Teaching Muslims is always a tenuous business, but I did manage to give out about a dozen Books of Mormon to various people in my school.

7. How many families do you know (LDS or not) who have more than two children? If a family with four children moved to your area, would their family size seem unusual? What about a family with six children?

There’s a bit of a variety in family sizes in Sarajevo. On the one hand, the war created an immense amount of poverty which kept families small, but there are a significant number of families with three or four children. My family, which has six children, seemed very large to most Bosnians, but they saw it as an impressive and desirable thing rather than something strange and unfavorable.

8. How many sisters do you visit teach? Do you have to travel far to reach them? What have been some of your best visiting teaching experiences?

In our branch in Sarajevo, the Relief Society was composed of four women: three Americans and a German convert who lived in a village quite a distance away who didn’t speak English and couldn’t often come to church because she didn’t have a car. We tried our best to visit the German sister regularly, but it was very difficult until we found somebody to drive her into Sarajevo on the Sabbath and hired a translator to facilitate communication.

9. What are the greatest challenges the sisters in your Relief Society are facing?

It’s hard to separate the challenges of the Relief Society in Sarajevo from the challenges of the branch as an entirety, since it’s such a small group and so much of what we do involves more than just the Relief Society. Still, the Relief Society had a difficult time fulfilling its responsibility to provide aid and welfare for the members since we had so few resources and since the German sister, who most needed our help, was difficult to reach. She was going through a lot of personal problems, and the language barrier made it very difficult to respond to those needs in the way a compassionate service coordinator in an American ward might. I think that it will be a great blessing to the church when missionaries are brought into Sarajevo who can try to fill those cavities.

10. What is the greatest blessing that the gospel of Jesus Christ has brought into your life?

The gospel has always been there. It is the most consistent part of my life, the thing I can rely on no matter where I’m living or what I’m doing, and has been instrumental in my self-definition. In the long run, though, I think the greatest blessing is not in how it has influenced my life already, but in how it will influence my life in the future: it has given me an understanding of eternal families and their importance that has changed how I interact with my family members and how I view the sacred ordinance of marriage.

Thank you Emma Lucy. Good luck with your finals :)
Heather@Women in the Scriptures at 5:38 AM
Share