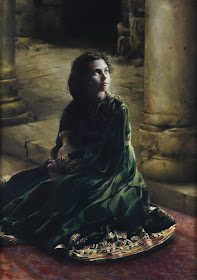 "According to Thy Word" by Elspeth Young
used with the artist's permission
I know I shouldn't pick favorites but the Gospel of Luke is my favorite book in the New Testament.

This is because Luke includes more stories about women in his gospel than any of the other gospel writers. His account is just overflowing with women! Not to mention that many of the women's stories are told in detail, beautiful intimate details, which show that he didn't just view women as a side story but as an important part of the story.

Luke, who also authored the Book of Acts (another book brimming with women's stories), was a later Christian convert and did not know the Savior himself. Though, as he explains in the second verse of his gospel, his purpose in writing was to give an account of Jesus' life, "Even as they delivered them unto us, which were eyewitnesses, and ministers of the word." Luke wanted to give an account "of all things from the very first" and since he had not witnessed them himself drew from several different sources to compile his gospel. 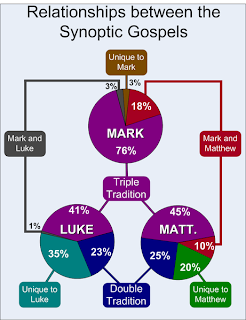 Many scholars believe that Luke wrote his gospel some time between 80-100 AD (source) and that he, as well as St. Mathew, used the gospel of Mark (which was written around 70 AD) as one of his sources. Scholars also believe that both Luke and Mathew drew information from another unknown source, commonly referred to as the "Q source" , which supposedly contained sayings of Jesus (see chart). Yet in addition to these sources Luke's gospel also includes much material that is unique to him and not mentioned in other gospels. For example many of the stories that Luke includes about women are not mentioned anywhere else, including the story of Elizabeth's miraculous conception, Mary's visit from Gabriel, Mary and Elizabeth's meeting, the words of the Magnificat, and the story of the nativity, among many others. All these stories are ones that scholars believe may have been part of a Christian oral tradition and that Luke drew from this tradition in order to compile nearly half of his gospel. (Source)

It is interesting to note that Christ died around 30 AD and it wasn't until 40 years later, after the temple was destroyed, that Peter instructed Mark (who personally knew Jesus and was an eye witness to much of His ministry) to write his gospel. Some scholars believe that during those 40 years Christians preserved the stories of Christ's life and His words through a strong oral tradition of storytelling and song rather than the written word. Evidence of this oral tradition might be evidenced many times throughout the epistles of Paul and other New Testament writers as they traveled preaching the gospel (source). In 1 Thessalonians 2:13 Paul writes,

and in Hebrews 2:1 the author instructs,

"On account of this we must give the more earnest heed to the things we have heard, lest we drift away. "

For example, Mary is the only one who could have known what was said between her and the angel Gabriel, or what took place between her and Elisabeth, or who would have known the details of the night Jesus was born. It appears that even though at the time Mary may have " kept all these things and pondered them in her heart" (Luke 2:19) that later in her life she shared them and that it was her words that were preserved through the oral tradition (or a written document) and which Luke later included in his gospel.

It is a beautiful to me to think of Mary telling her story--Christ's story-- to a group of believers and imagining what an impact the story of his miraculous conception and birth must have had upon them. Sometimes as I read Luke 1 and 2 I imagine myself sitting at her feet listening to her tell me about how she questioned the angel, "How can this be, seeing I know not a man,", how when she realized that what the angel had told her was true she exclaimed, "My soul doth magnify the Lord", and how she brought forth her newborn son and wrapped him in swaddling clothes. And even though the words we have in Luke must have changed some over time, I can still hear her voice and her story impacts me deeply, just as it must have those early Christian saints.

I hope that as you read the accounts of Christ's miraculous conception and birth this Christmas season that you too will to listen for Mary's voice and let the message of her story change your heart and bring you closer to accepting the sacrifice of her divine son, Jesus Christ.
Heather@Women in the Scriptures at 7:45 PM
Share