I hope that you all had a wonderful Christmas. Mine was really nice. I really enjoyed having Christmas on the Sabbath this year. We were visiting my dad and his church started at 9 AM. So we did our Christmas stockings and presents from Santa in the morning but then saved the rest of the gift opening till after church. It really made for a special Christmas; one that was much more Christ centered than usual. I loved it. In fact, I think that next year my husband and I are going to see if any of the churches around us do Christmas morning services and make that a part our Christmas traditions. If none of them do I guess we will just have to create our own little service or program. But I sure hope that at least one of them does because it just felt so right to be at church on Christmas.

I think I won the "worst mother of the year award".

A few days before Christmas I dropped Asher and Rose off at my friend's house so that I could finish up my Christmas shopping. I took Abe with me and headed off to the store. I went into the store and it took me about 25 minutes to find what I needed and get back to the car. When I got back to the car I realized, to my utter horror, that I had left Abraham in the back of the car the whole time I was in the store. I had totally forgotten about him! Luckily he was bundled up really well and it wasn't very cold outside. I am so glad that he was still sleeping peacefully in his car seat. I think that if he had been crying I would have dug a hole right there and crawled in. Even as it was I felt so bad, I wanted to die. I am glad he has some good guardian angels.
I shared this experience on Facebook and my husband's aunt was kind enough to remind me that even Mary traveled three days with the caravan before she realized that Jesus was missing and had to go back to Jerusalem for him, where she found him teaching in the temple.

It makes me feel a little better to know that even the Mother of the son of God made the same sort of mistake. Granted, her son was 12 years-old instead of a month.

Yet having now forgotten about my own sucking child I better understand now the love that God has for us. We are His children and, unlike earthly parents, He will never ever forget about us.

"Can a woman forget her sucking child, that she should not have compassion on the son of her womb? yea, they may forget, yet will I not forget thee. I have graven thee upon the palms of my hands..." Isaiah 49: 15

He will definitely never leave us sitting in the Wal-Mart parking lot. 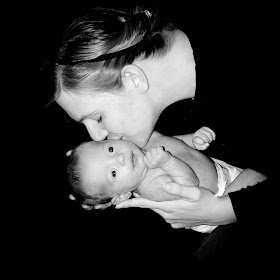 -3-
I think one of my favorite parts of Christmas is having a tree in the house. I am sort of picky and always insist that we have a real tree every year. It is mostly because we never had a plastic tree when I was growing up (and I refuse to compromise on that tradition) and also because I think there is something incredibly beautiful about having a living, breathing tree in my house (because contrary to what my husband thinks, the tree isn't "dead" until it stops drinking the water).

As I basked in the glow and spirit of my Christmas tree I was reminded of an article by Daniel C. Peterson entitled "Nephi and His Asherah". In the article Peterson talks about the tree of life that Nephi sees in his vision and its connection to Christ, Mary and our Heavenly Parents. The symbolism behind trees is deep and powerful and I hope that after reading this article you will never look at your Christmas tree quite the same way again. Here is just a bit of what he says,

"Since Nephi wanted to know the meaning of the tree that his father had seen and that he himself now saw, we would expect "the Spirit" to answer Nephi's question. But the response to Nephi's question is surprising:

And it came to pass that he said unto me: Look! And I looked as if to look upon him, and I saw him not; for he had gone from before my presence.

And it came to pass that I saw the heavens open; and an angel came down and stood before me; and he said unto me: Nephi, what beholdest thou?

And I said unto him: A virgin, most beautiful and fair above all other virgins.

And he said unto me: Knowest thou the condescension of God?

And I said unto him: I know that he loveth his children; nevertheless, I do not know the meaning of all things.

And he said unto me: Behold, the virgin whom thou seest is the mother of the Son of God, after the manner of the flesh.

And I looked and beheld the virgin again, bearing a child in her arms.

Then "the Spirit" asks Nephi the question that Nephi himself had posed only a few verses before:

Knowest thou the meaning of the tree which thy father saw? (1 Nephi 11:21)

Strikingly, though the vision of Mary seems irrelevant to Nephi's original question about the significance of the tree—for the tree is nowhere mentioned in the angelic guide's response—Nephi himself now replies that, yes, he knows the answer to his question.

And I answered him, saying: Yea, it is the love of God, which sheddeth itself abroad in the hearts of the children of men; wherefore it is the most desirable above all things.

How has Nephi come to this understanding? Clearly, the answer to his question about the meaning of the tree lies in the virgin mother with her child. It seems, in fact, that the virgin is the tree in some sense. Even the language used to describe her echoes that used for the tree. Just as she was "exceedingly fair and white," "most beautiful and fair above all other virgins," so was the tree's beauty "far beyond, yea, exceeding of all beauty; and the whiteness thereof did exceed the whiteness of the driven snow." Significantly, though, it was only when she appeared with a baby and was identified as "the mother of the Son of God" that Nephi grasped the tree's meaning.

Why would Nephi see a connection between a tree and the virginal mother of a divine child? I believe that Nephi's vision reflects a meaning of the "sacred tree" that is unique to the ancient Near East, and that, indeed, can only be fully appreciated when the ancient Canaanite and Israelite associations of that tree are borne in mind. Read the full article

-4-
I am excited for New Year's Eve this weekend. We have invited some friends over to help us stay awake. My husband and I have discovered over the years that we have to either go to someone's house or invite people over for New Year's Eve or else we end up going to bed at 11:00 PM. Totally lame.

I am also looking forward to making new "New Year Miracles" and reflecting on how God has miraculously answered some of the miracles I asked for this year. It never ceases to amaze me how when I ask in faith for something God listens. God is truly a God of miracles.

Wow, this turned out to be a long post. So I guess it won't hurt if I end it a little early, right?

Hope you have a wonderful weekend and a Happy New Year!