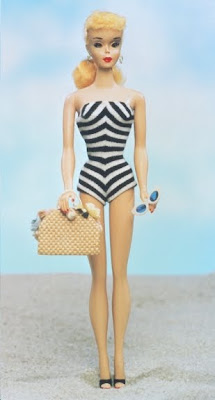 I was a HUGE fan of Barbie when I was younger. I easily had two dozen Barbies who between them all owned enough dresses, shoes, and accessories to clothe a small city. My friends and I played Barbies well into Jr. High and then, when it became too socially unacceptable to keep playing them, I started collecting them instead. I amassed a fairly impressive collection of "Special Edition" and "Collector" Barbie dolls and proudly displayed them on the shelves of my room. My infatuation with Barbie even continued into college and I actually had two of my collector edition Barbies sitting on my desk in my freshman dorm room!

Barbie and I were really good friends.

When I left home all of my collector Barbies went into a box and they have been in my basement for the last few years waiting for a little girl to grow up enough to play with them. Well my little girl just turned two, and I was gearing up to give her one of my Barbies for her birthday. Then, unexpectedly, I had several experiences that made me question whether or not I really wanted to introduce her to my little girl.

One of my readers sent me this interesting article "Why I Banned Barbie" about a mother whose school-aged son, just after having had a family talk about pornography, announced that he thought Barbie was an inappropriate toy to have in their home. The mother talks about how they decided that, for them, it was best not to allow Barbie in their home. The article reminded me of a book I have called "The Barbie Chronicles" that has long been hibernating on my bookshelf. It was given to me by one of my Freshman dorm-mates who thought it was ironic that a girl who was studying Women's Studies and had such strong ideas about women and femininity had two Barbie dolls sitting on her desk. She said she couldn't make heads or tails of it and she when she saw the book, which is a collection of essays for and against Barbie, she immediately thought of me. It had been years since I'd read the book and I decided to pick it up again.

The book brought up two main ideas about Barbie that, despite my great love for her, have really made me question whether or not I want her in my home. The first one is Barbie's undeniable sex appeal. A brief glance at her history shows that from the very start Barbie was intended to be a sexually loaded toy. In her essay in the "The Barbie Chronicles" Carol Ockman explains,

"Barbie was invented by a woman, Ruth Handler. Handler, a director at Mattel, together with her husband Elliot... had watched her daughter, Barbara (she also has a son named Ken), play with adult paper dolls and wanted to make a female adult doll in three dimensions. On a trip to Germany, Handler supposedly saw a doll called Bild Lilli, sold principally in smoke shops as a kind of three-dimensional pinup. Based on a comic-strip character that appeared in the German newspaper Bild Zeitung, Bild Lilli had a ponytail, feet molded into high heels, and clothes for all occasions. The principal narrative of the comic shows, Lilli, scantily clad, in situations where she is taking money from a man. Unlike Barbie, Bild Lilli was not made for children but for men... Handler decided to reinvent this pornographic caricature as the all-American girl... such a blatant sign of sexuality almost scuttled the doll when it was first introduced. Had it been up to the toy buyers at the toy fair, the ex-pinup/supermissle might never have been catapulted to stardom. Sears, Mattel's biggest client, categorically refused to buy Barbie, objecting to her too-overt sensuality. It was the consumers who launched Barbie's impressive career... Unlike her pro-type Barbie gives the appearance of sexuality without sex itself." (pg. 78-79) 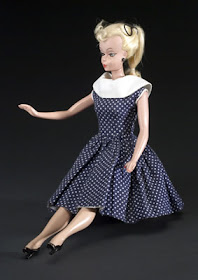 Now granted, I don't think that parents who buy Barbie for their kids, or the girls who play with her, would classify her as a "sexualized" toy. Yet I know, from years and years of playing with her, that Barbie often gets played with in ways that aren't always appropriate. In fact, I remember quite clearly that my first lesson about the "birds and the bees" was taught to me by one of my little six-year-old friends when we were playing with Barbie and Ken. Everything about Barbie, from her wardrobe, her nude body, her relationship with Ken, and the lack of any other "adult" supervision in her world invites a little girl to fantasize. When it comes right down to one of the biggest appeals of my Barbie dolls were that they could wear all the clothes that I wasn't allowed to, they could do the things I wasn't suppose to do, they could go places I couldn't, and be things I wasn't able to be. Barbie was a great creative and imaginative toy but she often tempted my little girl heart to play with her in ways I know my mother wouldn't have been proud of.

The other thing that really stood out to me in the book was the way in which Barbie embodies our culture's obsession with women's bodies and physical appearance. In her essay in "The Barbie Chronicles" Wendy Singer Jones says that,

"Barbie is a "body project" girl, she is, as others have observed, part of a complex of widespread and destructive messages directed towards women: being tall and thin is crucial, being white is the norm against which others are defined, ones character and career are always less important that one's looks, and consumerism is essential for keeping up appearances." (pg. 104).

Jones also compares what the world of Barbie teaches young girls about what it means to be a young woman as compared to what another popular toy the "Fisher-Price Dream Doll House" (which comes with a father, a mother, baby twins and some furniture) teaches them. She says,

"Despite the presence of friends and sisters, the Barbie line stresses individuals rather than relationships, and it does so in a highly narcissistic mode, since "body work" is a prerequisite to any form of social interaction. In the Dream Doll House, the family is greater than the sum of its parts; with Barbie, it's always the parts...When your project is your house rather than your body, you're already thinking in communal rather than solipsistic terms." (pg.101)

Another essayist pointed out that,

"The biggest difference between Barbie's aisle and the others can be summed up in one word: babies. In the other aisle, baby dolls were everywhere; in Barbie's aisle, babies were almost non-existent. Paleontologist Barbie or Pilot Barbie would be hard pressed to drag along a baby to the workplace. Even when Barbie is getting dressed for a night on the town with Ken, she obviously doesn't want to lug a baby long. (pg. 179)"

Looking back I can see how what I played and fantasized about with Barbie really affected my perceptions of adolescence and adulthood. Granted, I played with Barbie unceasingly when I was younger and I turned out okay, but I'm not sure if that is something I want my little girl to have access to in my home. As one essayist in "The Barbie Chronicles" pointed out the toys that parents allow in their home really send important messages to children, she said:

"You might still assume that dolls and other toys simply don't matter. A girl can play with any doll she wants, and it will not make a difference to her when she is older. But toys do matter, and they do convey ideas about how adult life should be run... toys convey a great deal about how adults wish children to grow up, and... toys prepare us for the roles we wish children to think of as "natural". What roles do we wish girls to grow up and assume are "natural'?" (pg. 181)

I'd never really thought about the message that Barbie dolls send young girls about what it means to be a teenager and what it means to be an adult woman. Yet as I really began to think about it I realized that Barbie sends the exact opposite message about womanhood and femininity than the one I want my daughter learning. Barbie teaches that how you dress determines your worth, that sexual appeal is what is valuable in a woman, that a relationship with "Ken" is the most important thing and that babies and family are afterthoughts, that breast are for appearances and not for function (her breasts have no nipples, so obviously there is no breastfeeding going on there!), and that shopping is the answer to all of life's woes.

And yet... I still really love her.

My husband can't understand it for the life of him, but the thought of getting rid of the box of Barbie dolls sitting in my basement makes me sad. For good or bad, Barbie was a big part of my childhood and it is hard, now that I see her with grown-up and critical eyes, to realize that I might not want my daughter playing with her.

Can you see my dilemma?

What would you do?