Bilhah and Zilpah were the handmaidens (servants) of the patriarch Jacob's wives, Leah and Rachel. Rachel, who was Jacob's favorite wife, had not been blessed with children. While Leah, Rachel's older sister, had given birth to four sons. Genesis 30 records that,

"...when Rachel saw that she bare Jacob no children, Rachel envied her sister; and said unto Jacob, Give me children, or else I die. And Jacob’s anger was kindled against Rachel: and he said, Am I in God's stead, who hath withheld from thee the fruit of the womb? And she said, Behold my maid Bilhah, go in unto her; and she shall bear upon my knees, that I may also have children by her."

In her desperation for children Rachel followed the example of Sarah, the wife of Abraham, and married her maid Bilhah to her husband so that she could have children through her. In Old Testament times this was an acceptable way for a married woman who was barren to gain children. In an ancient Nuzi marriage contract it stipulated that a woman whose servant bore the children of her husband "should have full authority over the offspring." (Source) This adoption ceremony was often conducted by placing the son or daughter on the knees of the mistress and declaring it her child. This may have been what Rachel meant when she said that Bilhah "shall bear upon my knees."

Alternatively she may have just been referring to the way in which ancient women commonly gave birth. Women in labor were surrounded by female companions who encouraged them to labor upright and dance and sway during contractions (belly dancing is actually an ancient fertility dance that women were taught a young age to help with conception and labor). During the final stage of labor a woman would squat and be supported under the arms by one or two other women. Often times bricks were placed under her to give her more support and the midwife knelt in front of her. This image of a woman being supported in a squat by other women is the most common image of women giving birth throughout history and around the world. So when Rachel meant that Bilhah would bear upon her knees she may have been referring to the actual position in which she would give birth. 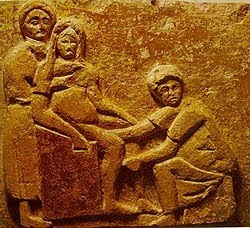 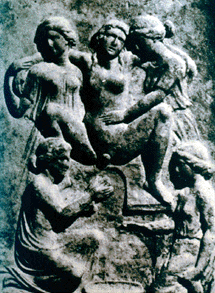 Either way it is almost certain that Rachel would have been with Bilhah during the births of her two sons. Also, the scriptural text seems to indicate that the sons Bilhah bore were considered to be Rachel's and that she would have raised them as her own. This is reinforced by the fact that Rachel named both of the sons Bilhah bore. The first son Rachel named Dan saying, "God hath judged me, and hath also heard my voice, and hath given me a son." The second son Bilhah bore she named Naphtali and said, "With great wrestlings have I wrestled with my sister, and I have prevailed."

After Bilhah bore Rachel two sons Leah found that even though she already had four sons she was no longer able to have children. So following the example of her sister Leah gave her maid, Zilpah, to Jacob as a wife so that she could have more children. Zilpah bore Leah two sons. Leah named the first son Gad and declared, "A troop cometh." The second son Zilpah bore Leah named Asher and said, "Happy am I, for the daughters will call me blessed." Like Rachel, the sons that Zilpah bore would have been considered to be Leah's and she would have raised them as her own sons. Nonetheless Bilhah and Zilpah would have been able to see their sons every day and their sons would have know that they were their birth mothers. In the official record given of Jacob's children in Genesis 46 Dan and Naphtali are listed as the children of Bilhah and Asher and Gad are listed as the children of Zilpah. These women may not have had legal claim to their children but they still played a large part in their upbringing and in their daily lives.

As I've thought about these two great women and reflected on their sacrifices I can't help but marvel at what amazing women these two handmaidens must have been. It makes me wonder what sort of relationship Rachel and Leah had with them. What did it take for them to share their husband with two other women? What did it take for Bilhah and Zilpah to share their children with two other women? It must have been hard, really hard. Yet they did it and through them came the 12 tribes of Israel... the covenant family of the whole earth.

These two handmaidens, Bilhah and Zilpah, made great sacrifices. Probably the greatest sacrifice that any mother could ever make. Yet they did it out of love--love for Rachel and Leah, knowing that they could given them something they could not get themselves. Love for their sons, knowing that they were giving them the best position, name, and quality of life possible in their situation. Their sacrifice reminds me of all the women who make similar sacrifices around the world today. All the Bilhahs and the Zilpahs who still selflessly give of themselves to bring children to women who are unable to have them any other way... and all the Rachels and the Leahs who will never be able to repay the gift.

Questions To Think About: