Would You Have Peeked at the Gold Plates?

I just finished reading “Mormon Enigma: Emma Hale Smith” a biography of the wife of the Prophet Joseph Smith. I couldn’t put this book down.  It was such an incredible experience for me to read about LDS church history completely through the eyes of a woman-- that doesn't happen very often.

One of the stories that impressed me the most about Emma was her interactions with the gold plates from which Joseph Smith translated the Book of Mormon. In September of 1826, Joseph went for a meeting with the angel Moroni on the Hill Cumorah not far from his house. When he had met with the angel before he had been told that the time wasn’t right yet for him to have the plates. This time though Joseph recounted that the “personage told him he could have the record the following September if he brot with him the right person and indicated that Joseph would know who that was.” Joseph Knight, a friend in whom Joseph later confided the story, said the young man “looked into his glass and found it was Emma Hale Daughter of Mr. Hale of Pensulvany.” (pg. 10 of Mormon Enigma)  It is awesome to me that God wouldn't let Joseph have the plates until he had Emma. She was a necessary part of God's plan for the establishment of his church and the Joseph's work as a prophet. She was Joseph's "help-meet"-- his equal. 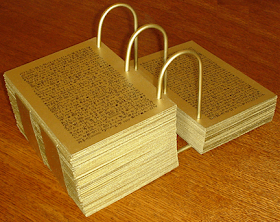 Image source
Evidently after Joseph’s meeting with Moroni he didn’t waste much time and he and Emma eloped on January 18th of 1827. In September of that same year Joseph again returned to the Hill Cumorah, this time with Emma driving the wagon. She waited for him as he climbed the hill and watched as he returned with a bundle wrapped in his coat. She didn’t see the plates but saw the outline of what Joseph told her was a gold book with ancient engravings on them. Over the next year or so those plates, and the translation of them, would become the center focus of Emma and Joseph’s life. She would eventually be chased out of her home, estranged from her father and mother, be bounced from home to home as a guest, loose multiple children, be debilitated by illness, chased by mobs, harassed and criticized, and eventually loose her husband because of those plates.
Yet despite everything Emma went through she never saw the gold plates because Joseph was never given permission by God to let her see them. Later in her life Emma recounted that, “They lay in a box under our bed for months but I never felt at liberty to look at them.”  She said they were sometimes on a table in her living room, “wrapped in a small linen table cloth, which I had given him to fold them in. I once felt of the plates, as they thus lay on the table, tracing their outline and shape. They seem to be pliable like thick paper, and would rustle with metallic sound when the edges were moved by the thumb, as one does sometimes thumb the edge of a book.”  Emma also mentioned that she lifted and moved the plates as she dusted around them but never looked at them.” (Pg. 25 in Mormon Enigma)  Emma claimed that she never had any desire to see them but in D&C 25:4 the Lord tells her "Murmur not because of the things which thou hast not seen, for they are withheld from thee and from the world, which is wisdom in me in a time to come."  So obviously Emma  did struggle somewhat with not being able to see or understand everything her husband did.
Emma's integrity really impresses me and I marvel that despite her doubts and her struggles she still went forth with faith in things she had not seen. As I've thought about Emma dusting around the gold plates I can't help but imagine myself in the same situation. "Would I have peeked at the plates?” I’d like to think I wouldn’t have, but I don’t know if I could say I wouldn’t have. I have a hard time leaving the "hidden" bag of chocolate in my dresser alone. I don't know how I would have faired with a set of gold plates.
The more I learn about Emma the more my heart is filled with love and admiration for her. Her life was truly a series of enigmas but really, given all she went through in her life, what an amazing woman!
I'm curious. Do you think you would have peeked at the God plates if you'd been Emma?
Heather@Women in the Scriptures at 9:00 PM
Share