Midwifery as a Calling 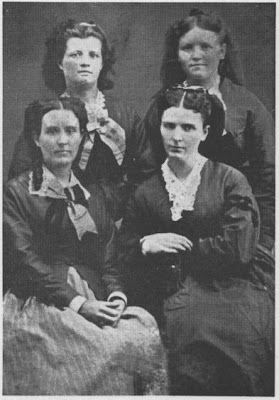 Dr. Ellis Ship and her "sister-wives"
Image Source
Did you know that the early days of the Mormon church, midwifery was a spiritual calling? That a woman was called to be a midwife by priesthood authority, often after having been nominated by the Relief Society, and set apart by the laying on of hands. She was usually set apart by a General Authority of the church, if available, and the calling was for life, much like the calling of Patriarch.

I've been doing a lot of research about early Mormon midwifery and women's birth experiences for the book I am helping with. I have some incredible stories.

Read more about it on my guest post "Midwifery as a calling" at The Gift of Giving Life.
Heather@Women in the Scriptures at 5:59 PM 4 comments:
Share

Birth on the Brain

So, the topic of birth has been on my brain a lot lately and it isn't just because I am a doula or because of my post on the importance of birth. A few months ago I started working on a project with some other LDS women to collect stories from LDS women about their spiritual experiences being pregnant, giving birth and becoming mothers. We've collected some amazing stories so far and it is really turning out to be an incredible project. If you have a spiritual insight into your birthing experience we would love to have it, especially if you birthed with an epidural or had a c-section (we are kind of short on those types of stories), you can email your story to ldsbirthstories@gmail.com. You can also go here to see more about the book and what will be included.

For the book I've also been working on writing up the birth stories from women in the scriptures. There are some pretty amazing ones and like always I'm astounded by what we can learn from theses ancient women. I've decided that I am going to so a series on these birth stories in the next week or two... and I just wanted to give you all a heads up so you could start getting excited! Yippee! Woohoo! Oh Goodie!

Oh, also if you've been taking the women in the scriptures challenge I'd love to hear how it is going and what you've been learning. Remember if you ever want to do a guest post or write something on your blog that I could link to let me know!
Heather@Women in the Scriptures at 6:27 AM 2 comments:
Share

Elisheba and the Daughters of Aaron 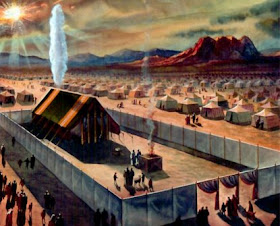 During their first year of wandering the children of Israel were commanded to build a tabernacle for the Lord. Aaron, the prophet Moses' spokesman and brother, and his four sons were washed, anointed, clothed, and consecrated to be priests in the tabernacle (Leviticus 8). From that time forth Aaron's posterity, also known as the Levites, were set apart from the other tribes of Israel and were the only ones to hold the priesthood authority. The Levites did not receive a land of inheritance like the other tribes did because the received the priesthood as their inheritance (Numbers 18:20). 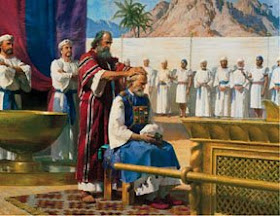 Even though she and her daughters were not ordained or washed and anointed like the men in their family, they still partook of the same holy offerings as the men and had part in the covenant God made with the Levites. We read that the Lord said:

"And this is thine; the heave offering of their gift, with all the wave offerings of the children of Israel: I have given them unto thee, and to thy sons and to thy daughters with thee, by a statute for ever: every one that is clean in thy house shall eat of it... it is a covenant of salt for ever before the Lord unto thee and to thy seed with thee..." (Numbers 18: 11,19)

Even though the men may have had more responsibility for the tabernacle, through their role of priests, the blessings, nourishment, and covenants made in the tabernacle were for all those who were clean, both men and women, to partake of. Just as this eternal truth was true in Elisheba's day so it is true today. Even though women don't have the same priesthood responsibilities as men they still are entitled to partake of all the blessings associated with the priesthood and priesthood covenants. God has an inheritance for His daughters just like he does His sons.

As I was researching I read a quote in "All the Women of the Bible" by Herbert Lockyre about how the Old Testament Elisheba and her sister-in-law Miriam are types and shadows of the New Testament Elizabeth and Mary.

" It is not only in the New Testament that Elisabeth and the Holy Mary are those associated together: their types in the Old Testament are in like manner combined... Elizabeth herself, it is said by Luke, was of the daughter of Aaron but it is mentioned in the book of Exodus that Aaron's own wife was name Elisheba, that is Elizabeth (6:23); again we find in Luke, that the Virgin Mary was the cousin of Elizabeth, so in the former instance the sister of Aaron was named Miriam, that is Mary, for it is the same name; Miriam or Mary, the virgin prophetess, who took the lead of all the other women in singing the song of thanksgiving for the miraculous deliverance of Israel (15:20). Thus even now the Blessed Mary is followed by all other women in her signing her Magnificat; the virgin and the prophetess, she leads the sacred company in the Church unto this day" (From Issac Williams, "Female Characters of the Scriptures") 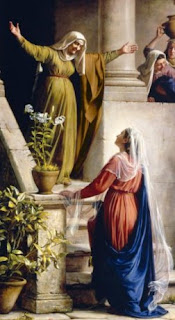 How wonderful it is that the Old Testament Elisheba and Miriam were types and shadows of the New Testament women who would bear John the Baptist and Jesus Christ. I also love it that in this instance God used women to be highly symbolic and to bear testimony of the birth of Christ. I can't help but feel that Elisheba must have must have been a great woman to have been chosen to fill the symbolic position she did and to raise her sons and daughters to be worthy of such great priesthood blessings.

What we can learn from her:
Questions to think about:

Power or Influence: Which Would You Choose?

I've been working on a project for our church's Relief Society Birthday Party next month (to be announced later) and in my research I stumbled across this quote from Belle Spafford (pictured below), the 9th General President of the Relief Society. 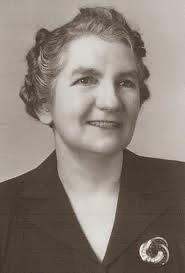 It has really intrigued me and I'm curious to know your thoughts on it.

This is what she said:


"I recall at one time when I first served in a Relief Society presidency the ward had built a new meetinghouse. They had to raise a few thousand dollars in order to have done and dedicated on time. The R.S. was called upon to prepare a turkey dinner to a large group. It was the first dinner in the new building. We found the kitchen to be insufferably small, the women were in each other's way, slowing up the service. One woman fainted from the heat.

The next day, distressed about this circumstance, I went to see the bishop. I explained the situation and requested we knock out one wall and extend the kitchen to include the adjoining space which ad been allocated for a classroom. He responded with sharpness, 'Certainly not,' he said. "We aren't going to start remodeling this building before it is dedicated.'

On my way home, discouraged and feeling somewhat reprimanded, I called at the home of one of the older sisters and I poured forth my troubles. I concluded by saying, "In this church men have all the power, the women are helpless." To this she replied, 'Oh no, my dear, the women are not helpless. If someone came to you, Sister Spafford, and had a great but different gift in each hand and one was power and the other was influence, which gift would you choose?'

I thought seriously for a moment and then I said, 'I think I would choose influence.' "You probably did, my dear." she said. 'Influence is a great gift of God to women." Then she said, 'Appreciate it and use it right. Do not envy that which has been given to the brethren.'"

So which would you choose-- power or influence? Why?

Do you think Belle Spafford's friend was right? Is that a fair statement? Do men have power and women influence, or the other way around?

What has been your experience?
Heather@Women in the Scriptures at 12:53 PM 7 comments:
Share
‹
›
Home
View web version