Every General Conference I pray that God will answer certain questions of my heart and this conference I was praying that He would teach me something new about women in the scriptures or about God's relationship with women. I was hoping that someone would give a whole talk based off a woman in the scriptures or that someone would use an obscure scriptural woman to exemplify a gospel principle... no such luck. The only mention of women from the scriptures was an indirect reference to the mothers of the stripping warriors. I was kind of disappointed. Yet even though there wasn't a direct talk mentioning women in the scripture God still answered my prayer.

In Elder L. Whitney Clayton's talk "That Your Burdens May Be Light" he said:

... Burdens provide opportunities to practice virtues that contribute to eventual perfection. They invite us to yield “to the enticings of the Holy Spirit, and [put] off the natural man and [become] a saint through the atonement of Christ the Lord, and [become] as a child, submissive, meek, humble, patient, full of love, willing to submit to all things which the Lord seeth fit to inflict upon [us], even as a child doth submit to his father." ... Adam was told, “Cursed shall be the ground for thy sake,” which meant for his benefit, and “by the sweat of thy face shalt thou eat bread.” Work is a continual burden, but it is also a continual blessing “for [our] sake,” for it teaches lessons we can learn only “by the sweat of [our] face.”

It dawned on me that if Adam's curse was really a blessing, that the land was "cursed" for his benefit so that he could learn the lessons that could only be learned by working by "the sweat of his face", then perhaps the same thing was true for Eve. Perhaps what has so commonly been interpreted as Eve's "curse", bringing forth children in pain and being ruled over by her husband, were instead blessings from God that were intended to help her learn the lessons she needed in order to return to the presence of God.

Initially I had a hard time believing this; how could a loving God purposely send his daughters out into the mortal world with a "blessing" that would only result in them being hurt, controlled and demeaned by men? Yet as I read the scriptures closer I found that the only things that were cursed by God were the serpent and the ground. God tells Eve

"... I will greatly multiply thy sorrow and thy conception; in sorrow thou shalt bring forth children; and thy desire shall be to thy husband, and he shall rule over thee." (Genesis 3:16)

There is absolutely no mention of a curse or even of a punishment. In fact, when I began to break down what God told Eve I saw that it was truly a great blessing, intended to liberate and empower His daughters. He is telling her that:
That doesn't sound like much of a curse to me.

I think it worth while to take a closer look at what God was telling Eve. By breaking the scripture down into its individual parts one can get a better understanding of the great blessings God has designed for His daughters.

"Unto the woman he said, I will greatly multiply thy sorrow and thy conception..."

The Hebrew word for "multiply" is rabah (raw-bah), meaning to repeat over and over. It does not suggest greater sorrow, but rather repeated sorrow. The Hebrew word for "sorrow" in the Geneiss account (Genesis 3:16( is from atsab (aw-tsab), which means "labor" or "pain". While these words sugges that toil and suffering would be a part of Eve's life, Eve did not view the conditions that came upon her through the Fall to be a curse (see Moses 5:11). Moses 4:22 is a great revelation to women. Eve and her daughters can become co-creators with God by preparing bodies for his spirit children to occupy on earth and later in eteriny. Mothering would entail inconvenience, suffering, travail, and sorrow; these the Lord foretold as natural consequence and not as a curse." (Rasmussen, Latter-day Saint Commentary, 17)

God is just describing to Eve how her mortal condition is going to be on earth, that she will increase in size (pregnancy), that she will bear children and that she will do it multiple times. She must have been grateful later on that God gave her some heads up as to what would happen to her body. Imagine how scared she must have been the first time she got pregnant! She would have had no idea what was happening to her or what she could expect. Here God is explaining to her what will happen to her and what she has to gain from it.
We also have to remember that Eve wanted to have children, that is why she partook of the forbidden fruit. In the Garden of Eden God had commanded her and Adam to "multiply and replenish the earth" but because they had not fallen and were not mortal they were unable to fulfill God's commandment. Eve understood that by partaking of the fruit she would "fall" from the presence of God, but that in doing so she would become more like God because she would gain the ability to bear children and to comprehend good from evil. One can only imagine that she must have interpreted God's decree that she would bear children, many children, as a great blessing. 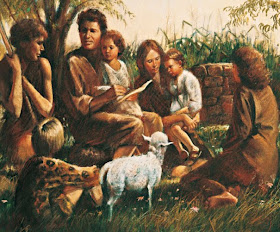 "... in sorrow thou shalt bring forth children..."

The "sorrow" here is the same "sorrow" that God pronounces upon Adam when he says, "In sorrow shalt thou eat of it [the ground] all the days of thy life." The Hebrew meaning of this word is also "travail or pain". God is telling Adam that it will take great work and pain to bring forth food from the earth, just as he is telling Eve that it is going to take great work and pain to bring forth children from her body. He's not giving them unequal responsibilities, both Adam and Eve's mortal responsibilities involve hard work and pain. What he pronounces upon one, he also pronounces upon the other.

Even the fact that having children would bring her pain must have seemed like a blessing to Eve because it meant that now she and Adam were able to feel sorrow, and if they could feel sorrow then they would also be able to feel joy. She accepted this and in Moses 5:11-12 we read that she blessed the name of God and said

The sorrow and pain of bringing forth children was no punishment for Eve because she understood that it was only by partaking of the bitter that she would be able to comprehend the sweet.

Childbirth isn't easy, just as raising food from the earth isn't easy. Yet just as a farmer feels great satisfaction, joy and rest at the end of his harvest, so does a woman after giving birth. Most women who have given birth will tell you that in the joy of holding their new child all the pain and sorrow of prengnacy and labor melted away. I believe that God designed both tasks, childbirth and raising food, to be hard so that men and women would be able to find transforming strength and power to face the challenges they would face during their mortal journey.

"... thy desire shall be to thy husband"

Eve knew that she was about to leave the safety and innocence of the Garden and enter into a fallen, corrupt and mortal world-- where she would be expected to bring forth and raise all the children of the earth. How scared and overwhelmed she must have been by this huge responsibility!

God promises Eve that she will not have to shoulder the enormous responsibility and burden of bringing children into this world by herself. Before she left the Garden God promised Eve that her "desire would be to her husband". This desire isn't just sexual desire, but it means she would desire to be with Adam and to work with him towards their joint goal of becoming like God. They would undertake their mortal journey together as partners. This is the first time that God lays out the foundation for all family relationships. His design for the family was that both men and women should desire to work together as partners and that together they would rule together over the stewardships that God gave them. He knew what challenges and trials Eve would be facing as she brought children into this world and so He organized the family structure to help protect and take care of His beloved daughter and her children.

When organized after the pattern God created, with a man and woman working together as equal partners, the family structure does not entrap or enslave women, rather it protects them, frees them, and ennobles them.

Once again this is an instance where understanding the Hebrew terms change the whole meaning of the scripture, because "rule over" can also be translated as "rule with". In her book "Women in Eternity, Women of Zion" Valerie Hudson Cassler says:

"... persuasion.. long suffering... gentleness and meekness...love unfeigned...kindness... pure knowledge... without hypocrisy... without guile... reproving betimes with sharpness, when moved upon by the Holy Ghost; and then showing forth afterwards an increase of love..." (D&C 121:41-44)

Even if God was telling Eve that her husband would rule over her, being ruled over by someone who followed all these principles of righteousness wouldn't be all that bad. But if God is telling Eve that she will rule with her husband then it becomes her responsibility to treat all the stewardship God has given her-- the earth, the animals, her children and her body-- with love, respect and wisdom.

I don't believe that God ever intended for men to rule over women. It is just the corruption of our fallen world that has perverted His words and used them to justify inequality and control of women throughout history. I beleive that from the very begining God intended men and women to be joint stewards of God's creations and to work together as equal partners. He laid the foundations of family life, gave them a road map towards happiness, and endowed them with individual abilities and talents that would help them achive their common goal... becoming like God.

God never cursed Eve, He blessed her.
Heather@Women in the Scriptures at 12:41 PM
Share