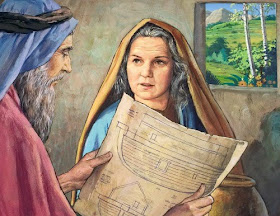 Only nine generations after Adam's death the world had become "corrupt before God" and it was filled with violence (Genesis 6:11). It was so wicked that the Lord "repented... that he had made man on the earth" and vowed to "...destroy... from the face of the earth; both man, and beast and the creeping thing, and the fowls of the air." (Genesis 6:6-7) Amidst all this wickedness Noah remained faithful and found "grace in the eyes of the Lord." (Genesis 6: 8) God makes a covenant with him that he will save him, his wife, his sons, and his son's wives from the destruction. He provides Noah with instructions on how to build and ark that will carry him, his family and all the creations of the earth to safety (Genesis 6: 13-22).

Even though we don't know her name, or know much about her, this woman was one of the most important and influential women in the history of the world. She, like Eve, was the mother of the human race. It is through her that all the nations of the earth after the flood were born. In fact, her and Noah's story is very similar to the story of Adam and Eve-- just a bit backward.

Here is the sequence of events in the Adam and Eve story:
Compare this to the story of Noah and his wife.
In a way she and Noah were a second Adam and Eve being reborn into a clean and pure world. I think there story represents the potential that all of God's creations have for rebirth and redemption. Each of us is living in a fallen, wicked and corrupt world but through our righteousness God promises us that we will be able to be "reborn" into his kingdom where we will inherit eternal glory (Moses 6:59).

The story of Noah and his wife illustrates how God will redeem his righteous people from the fall, how he will deliver them and how he will provide for them a world that is pure and clean. It is also significant to note that it isn't just the animals that go into the ark "two by two" but that the humans also go into the ark in husband and wife pairs. I think that this teaches us that God's work is done by pairs, a husband and a wife, and that it His desire that we come unto him "two by two".

Another thought I've had about this story is that the ark is representative of the temples we now have on the earth. Inside the temple a man and woman are sealed together, "two by two", and given great promises which are dependent upon their faithfulness. The temple is a place of safety and peace amidst a world that is filled with violence, wickedness and corruption. In a way the temple is our modern day ark, which carries us through this through this fallen world and gives us a glimpse of the clean and pure one we will enter one day.

Noah's wife must have been an incredible woman. Her example gives me hope and strength as I too am attempting to raise a family and be a righteous wife and woman in a wicked and violent world.

What We Can Learn From Her:
Questions to Think About: